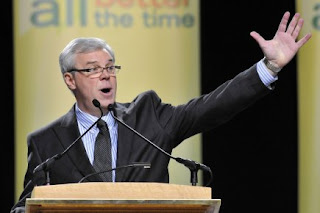 There has been increasing signs of the NDP lashing out and getting angry about where they are in the polls. I suppose the people in Greg Selinger's office believe that angry accusations and a campaign of fear will help close the gap with the provincial Tories.

After 10 years, political parties usually outlast their welcome. The same old shtick that worked in the past stops being very effective. In fact, people start looking for alternatives.

Selinger had two ways to go when he became leader. The first was to say he was the continuation of everything that Gary Doer was and did. The other thing he could have done was say that he was taking the party and the province in a new direction in keeping with the times.

It would appear that he has gone with a continuation of Doer. In that light, he pales.

Even though the economy has not done as badly as elsewhere, people in the province of Manitoba are looking for confidence, innovation and vision. Instead, they are seeing fear and loathing.

I expect things to get nastier and it could help a bit in the polls for the NDP but I don't know that it will be enough to win yet another majority.

People in Manitoba are looking for more.