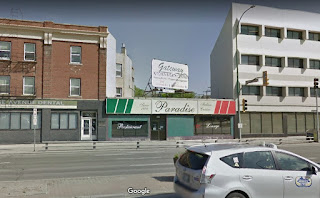 After 40 years some things just seem permanent. Even if you never went into the place, Paradise restaurant at the split between Broadway and Portage Avenue felt like it was always going to be there. The Since 1978 written on their sign affirmed that it had outlasted many other restaurants of over year. So successful was the brand that they opened another Paradise on Leila in 1983 and it too stood its ground.

Alas, Paradise is no more. A sign in the window said that the restaurant was having staffing issues the last five or six years. Vince Magro and family that owned both locations retreated to their Leila location which they still run. At 100 dining seats and 50 lounge seats, Paradise was probably a beast to run, especially when it didn't have a breakfast menu.

It is a difficult thing to run a restaurant and do so successfully. The changes in demographics, neighbourhood changes and what people like to eat can vary. People who like this restaurant can take comfort in the fact that one will still exist in the city although it may be a longer ride for some.

As for the future of the restaurant site? Once the infrastructure is in place for a restaurant, the building often comes back as a restaurant. This will be a site to keep a close eye on.
Posted by John Dobbin at 10:40 PM