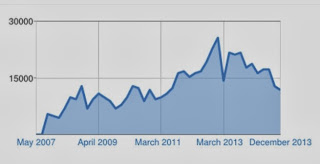 It has been hard writing consistently the last two months due to huge work weeks. New posts draw more visits for sure. Blog posts ending up on the Free Press site draw some traffic. I end up writing a lot about zoning developments, politics, retailing, social commentary and whatever. There were a few posts that drew hundreds of visits and still do.

Each time a blogger stopped blogging full time, there was usually a drop in traffic on this site. The truth is that people go from site to site and when a site goes down or is inactive traffic drops.

I have written here before how long form blogging is harder to find in the city and in general. Twitter has become the main way to engage for Winnipeggers in words. I do write there as well but truth be told, I don't own a cell phone. This means I don't have a constant connection to Twitter to be part of the ongoing conversation.

I am not a Luddite. I do have computers but I do find it hard to justify a cell phone based on my work, the costs and concerns about how it might prove a distraction.

I have never been overly concerned how many visits the website gets. I write mostly because I like to.

I continue to talk on Internet Pundits with some of the most interesting people and look forward to keeping that conversation going.

What will the future hold? Well, I am still of the mind that a central website for Winnipeg content would be good and that place would be a forum for long form writing in news, sports, politics, photographs, entertainment and the like. Stayed tuned for that.
Posted by John Dobbin at 11:14 PM

Email ThisBlogThis!Share to TwitterShare to FacebookShare to Pinterest
Labels: blogs