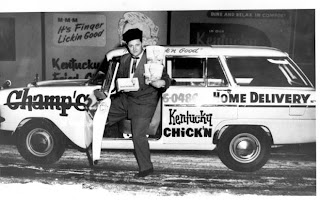 From the Winnipeg Tribune Collection

The date is either 1957 or 1958 depending on who you ask but Champs Food Systems came into existence with a drive-in in the North End. Oscar Grubert, a young lawyer at the time secured the franchise for a fast rising restaurant chain called Kentucky Fried Chicken.

For over two decades thereafter, Kentucky Fried Chicken was known locally as Champ's.

In the years after, Oscar Grubert established a few other restaurant chains. For a time in the 1970s a restaurant named Grubee's existed in a number of locations. It was a burger joint where you could put your own condiments on the burger. While Grubee's didn't last into the next decade, Grubert created a few other restaurants that did. Mother Tucker's Food Experience lasted for many years in the downtown and was a favourite for those celebrating a birthday. Today, Mother Tucker's continues to operate in Ontario.

At present, I am searching for another information and anecdotes about Champs, Oscar Grubert and the various restaurant entities.

Email ThisBlogThis!Share to TwitterShare to FacebookShare to Pinterest
Labels: restaurants

Interesting! I've seen Grubees outlets in pictures before, but I have no recollection of them since they were a little before my time. (Weird that they disappeared like that considering that the owner's other food ventures were pretty long-live.)

If you have any pictures, please post them or send them to me!

I liked Grubee's when it was around. I was sad to see it go. Feel the same way about Mother Tucker's.

Perhaps the Free Press archives have more data on what happened. I don't have access to that far back though unless I hit a library.

I remember seeing the Portage Avenue downtown outlet in photos of the streetscape (maybe in Ross Gourluck's book?) but I'm afraid I don't have any links.

Where were some other locations?

I believe there was a location on Notre Dame but I will keep checking.

There was a Grubee's at 4 St.Mary's rd which is now just been rebuilt as a new Santa Lucia Family Restaurant I believe

Texas, I do believe you are right about that. I can't recall how many of Grubee's were in the city but I think at least three or four.

There was indeed a Grubee's on Notre Dame in the late 1970s, and probably into the 1980s. It was around Notre Dame and Arlington, maybe a bit to the west.

As I remember, Grubee's was inexpensive, but it was a bit upscale as hamburger places go. The burgers were excellent quality and tasted like chopped steak, and they had a nice barbeque sauce.

I lived in the west end, and Grubee's was one of my favorites. I'm not sure my simple tastes went a long way towards impressing my dates, though . . .

How about Butcher Blocks, G Willikers & the Garden Crepery? Don Kennell tells a story about speaking to a group of Grubbees managers (including a young Nolan) about the best order to add on the burger condiments, to best effect the taste buds - they bought it hook,line and sinker. The old Winnepeg Tuckers was a chilling place to close at nights end - the alarm set & lights were at the front door and you had to exit out the side door; walking by all the ghosts!

I can tell you that there was also a Grubee's location in Saskatoon. It was operated by the KFC franchisee there.

Thank you for proving I'm not insane! Not one of my friends remembers Grubee's. I distinctly remember the location on Notre Dame. It was a special trip because we lived in Selkirk. It had gas fireplaces in the middle, the first I'd ever seen, I was fascinated.

i was obg's (oscar bert grubert) creative director/advertising guy from 1972 to 1985...don kennel was on-staff upper mgmt a time for huge growth for the champ's organization...there were 5 grubee's locations in the peg in 1972 serving ROAST BEEF, the specialty, along with a do-it-yourself-sundae-bar,the first unit was at notre dame and mcphillips where today mcd/burger king(?) exist...grubee's was orinally planned as franchise with many interested parties waiting to develop the chain which was successful and growing...a crossroads came with the success of grubee's and m.t.f.e.(mother tucker's food experience) and the decision to pursue grubee's burger's as franchise or to push forward the development of m.t.f.e...under brilliant leadership from rene bazinet grubee's was dumped and all out 10,000.000$ push spread tucker,s internationally and champs food systems was a 100 million/yr/privately/family owned... i was responsible for new concept, menu design/promo/media buying for g.willaker's, t. bone's food and beverage company, the garden creperie, the cock and bull,strawberry's, butcher block, thomas button's, gabby's and long-term development of mother tucker's food experience in 12 canadian locations and 13 u.s. locations gave me great experience in dealing with o.b.g. a one-of-a-kind genius that brought kfc to wpg (the first franchise in canada) and built his 1st champ's kentucky fried chicken location on henderson hwy, along with best buddy bill goldberg in 1957, to a 100 million dollar privately owned,2nd only to mb gov for number of employees and led the way for independant restauranteurs...along with being great people to work for(oscar and bill)they were generous,trusting,funny,low-key multi-millionaires,family oriented and knew the value of hiring talented people, from managers to waitresses to hostesses to ad guys, like me, and letting us loose to do our thing...out of 30 years dealing with every level of business that i have experienced, oscar/bill were tops...bill g. looked the wrong way in australia and met an untimely demise...he was always in great shape and constantly looking for some kind of new gadget...oscar i believe sold out many years ago...must be near 80yrs and lives between l.a.(not logan and arlington) and t.o., great man and a great company to work for...best time of my life...i was treated like his son. like one of the family...flew in corporate jets,ate at the finest tables in the best company, drove obg's giant mercedes 500, 12v jaguar, and in the end, made him and company a lot of money... n/d

Grubee's also was on Nairn, best hamburgers ever!

The Nairn location is where Chicken Chef is now.

i worked for kfc mcphillips 005 in the mid 80's,later in the head office on inkster blvd,not the best pay but a great place to work and worked for some great people,brian white,jim steeves,donna gault ,penny tewes etc,met my wife there as teenagers.My wife made me quit because the pay really was not good .I have great memories of birthdays at mother tuckers with my parents.went to grubees a lot when it was on notre dame close to mcphillips.(there is a burger king in that building now).I remember all the restaurants of the specialty division,even Jays seafood broiler at the old paddock restaurant on portage ave,( now red lobster/olive garden.I think that company peeked in the late 80's and had a slow decline after pepsi bought out the KFC's( grubert and golbergs cash cow) and grubert spending all his time in L.A,.His son nolan and his wife i dont think had the talent to run this company like oscar and bill.That been said no regrets ,had some good times there.

I lived on Furby, attended Red River CC 1976 - 1978, and Grubee's was by far my favorite hamburger place. Stopped at the one on Notre Dame often. Evidence: I recall the name, and have a hard time not thinking of them whenever I step into the hamburger chains that did survice.

With respect to the employees who posted, it is definitely the hamburgers that I remember. I don't recall the roast beef, but that might have simply been a menu preference issue. I do remember the 'dress your own' and the presence of a pretty hot sauce, probably horseradish based? which absolutely tickled my palette.


Last tiny bit of Grubee's trivia: I don't know if it was Grubert's place or what, but in those years, there was a house somewhere (St. Marys? Dunkirk?) that had a very large Grubee's sign hung on a living room wall, that was always turned on and very visible from the road.

For some reason I was thinking today, "What ever happened to Grubee's?" and found this blog.

There was a Grubee's on Portage Ave, north side, just east of the MTS Centre (Eaton's of course, at the time). That would have been about 1978. I spent too much of my teenage summer job money there.

At the time that's where all the record and audio equipment shops were. Advance TV had a location there.

Sad to share news of Oscar's passing yesterday, February 11, 2014. He will be sorely missed.
http://www.benjaminsparkmemorialchapel.ca/ServiceDetails.aspx?snum=130368&fg=0

I remember Grubees at St Mary's and Fermor, which is now Juniors

yes there a grubees on notre dame my dad used to takes us kids there when we were young .... a long time ago

Champs isn't a thing KFC is a multinational corporation owned by hi flyer foods (taco bell and pizza Hut) the Jewish guy sold out for lots of money?? Noooo..... lol

It was at notre dame and mcphilips.. I remember going there for burgers, I would always eat plain burgers.lol 7-11 did this concept with their build your own burgers, but that was years later.

Does anyone have a photo of the Champs chicken outlet at McPhillips and Inkster in Winnipeg? In 1960's.

Can you tell me what years that Grubees was open (Portage in Westwood) as my dad passed away in 75 and I recall it being around before he died.

I believe it’s now the Burger King in Notre Dame. I always remembered this place but none of my friends have a clue. Miss that and the Champ burger

I remember Grubee's which led me to this site. I was quite young when it opened up and I lived in Transcona at the time and there was a location on Nairn Avenue (Regent Avenue). The building is still standing, in the same lot that Gamble's used to be in. There was another burger restaurant after it went out, then a burger joint, then Kenny Rogers Roasters and then Chicken Chef which has also vacated the building now. What I loved so much about Grubee's was it was one of the first restaurants in Winnipeg to let you put your own condiments on your hamburgers. I loved the really hot round cherry type peppers. I used to take a handful of them and have them as a side dish with my hamburger, fries and drink. I remember the restaurant well and still which it were here as well as Mother Tucker's Food Experience. The restaurant was nicely decorated, the staff was great and the food was awesome. You know what? Those were the days my friend!