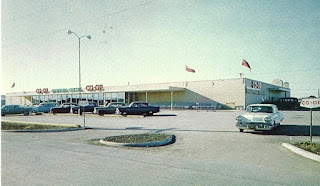 From 1957 to 1983, Red River Co-Op ran grocery and pharmacy stores in Winnipeg. The 20,000 square foot store on Wall Street was the first and last of the grocery stores to operate before the Co-Op got back into the business in 2014.

The Red River Co-Op got its start in 1937 as a fuel supply company and had a number of coal yards and gas and diesel supplied from the Federated Co-Op from mines and refineries in Alberta and Saskatchewan. By the 1940s the fuel yards added general stores.

In the post war boom, grocery stores were becoming bigger and Co-Op felt they had enough members and demand and built one of the larger grocery stores of the day on Wall Street for around $750.000. The store had more in common with a Walmart in that it had general merchandise and a pharmacy as well as appliances. There was also a credit union, gas station and farm supply building. At the time there was only 4000 members of the Red River Co-Op but this investment proved to be very successful.

Other stores followed and the Co-Op grew although slower than some other areas in the west. Still, by 1978 there were eight grocery stores in Winnipeg and surrounding area. In 1979, Red River Co-Op made a critical misstep when they built a $10 million Home Center that was around 5,600 square feet at McPhillips and Stardust.

One year later Winnipeg had one of the worst years since the Great Depression. It was in 1980 that Swift's, Canada Packers and Winnipeg Tribune collapsed and the province sunk to numbers of unemployment, stagnation and inflation all at the same time. Red River Co-Op was in debt and bleeding money as people left the province.

The grocery business collapsed and only the Wall Street location above managed to hang on till 1983 when it too closed.  Red River Co-Op held on as a fuel supplier and nursed itself back to health for decades after. At its worst, Co-Op was down to three gas stations and most didn't see a future for it.

However, each Co-op gas renovation would soon have a convenience store and after years of expanding to more location, they had become a confident retailer again. They got back into the grocery business when the merger of Sobeys with Safeway forced a sale of assets by the federal government.

It remains to be seen how Co-Op will look in the future. Winnipeg is far more diversified than it was in the 1980 recession. And this helps businesses like Co-Op stay viable and gives good returns to those that use it.
Posted by John Dobbin at 9:53 PM