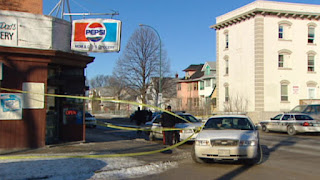 These reports were culled from tweets, emails, blogs and other online stories. Much of the mass media missed the earlier story as they were covering the IKEA opening across town.

* Tweet: Wow, just saw the police tape go up near Mom and Dad's Grocery on Mountain. Either that is blood all over or they had a sale on ketchup! #JustTypicalWinnipeg

* Tweet: I saw at least five or six bodies there. Cops all over the place! Ambulances took away a few of the injured.  This would never happen in Tuxedo. #WinnipegMurderCity

* Text: Mom, trapped in car on Main. Traffic backed up. Near Mountain and crime scene. Ick, get me out of here!

* Email:  I know you said the area would become the new Osborne but I don't remember the village having so many people aimlessly walking the streets.

* Blog: North End True Crime The police only got involved this morning with the attack on Main but as I reported a few days ago, there has been strange goings on in the neighbourhood all week. Every night from my basement window I see people shambling about and moaning. I know I have seen people lying out there in the night but in the morning they are gone! Thank goodness I have bars on the window. Every night someone has tried to get in.

* Tweet: A mob is attacking the police! Stuck in traffic on Main! #WinnipegRiot #StuckTrafficWinnipeg

* Email: I am hiding in a hospital clerk's office. It started this morning but it probably went on for some time before we knew about it. The ambulances from last night had to wait in the bays for hours to discharge their patients. We don't triage bite patients till more serious emerg people are dealt with first. When our security guard did open up the doors a flood of people rushed the door including paramedics! It was a mob attack! I still hear screaming far off. I don't dare open the door. I called the police but all I get is a fast busy signal. I called virology too because this looks like a blood borne infection. But what could do something like this?

* Blog: Politics in Winnipeg It is a full scale disaster in Winnipeg and the Mayor Sam Katz is at his home in Arizona. The Emergency Response Centre is being commanded by the only Councillor who could make it is: Jenny Gerbasi. She gave this surprising announcement: Shoot for the head! Some commentary I saw in tweets says she has alienated many of her NDP colleagues with her violent outburst. NDP activists have sent a humanitarian team to what is being called an "infected area."

* Blog: True North End Crime: It would appear that the NDP delegation was eaten.

* Tweet: You heard it here first. These are zombies. I am with Gerbasi: Shoot for the Head! #ShootForHead

* Email: We are using garbage containers as barricades! Since they have not been picked up for days, the garbage makes us smell like the dead.

* Blog: Politics in Winnipeg: Greg Selinger and the NDP issue news release that they won't interfere in what is a city matter. Selinger departed thereafter for a trade trip to Outer Mongolia.

* Tweet: The only safe place is downtown since no people are there! #Doughnut City

* Email: It looks like a herd of zombies is moving south. Could they be headed south for the winter?

* Tweet: Trying to escape on rapid transit but we're all stuck here at Confusion Corner. #ConfusionCorner

* Blog: University Stud: I wasn't aware of the zombie attacks and quite frankly, I don't care. I'm not interested in politics.

* Tweet: The zombies are in Osborne Village! But first must get tights at American Apparel.

* Blog: In the Village: It appears the zombies have attacked the Osborne Inn and the fetish ball! Ooo, fishnet zombies.

* Blog: Southie: It appears Jon Gerrard has the best approach to this zombie problem but can't a seconder in the Legislature. Plus, media attention is all on IKEA opening.

* Email: The zombies have crossed into southern and western Winnipeg. After some initial confusion about how to navigate the swirly streets of St. James, the zombie just headed down Portage Avenue and overwhelmed the evacuees as they tried to get on the Perimeter Highway.

* Tweet: Zombies speeding through River Heights. The traffic circles are jammed with cars and bikes!

* Blog; Southie: The reporters have their backs turned away from the zombies as they cover the IKEA opening. They are eating the reporters! Oh, the humanity.

Shortly after this phone and Internet was cut off from Winnipeg.