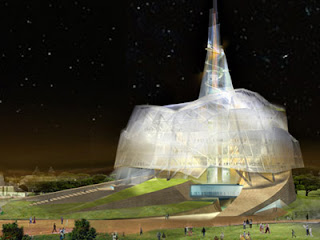 I'm a bit surprised that this has gone by without notice by more people.

The NDP Premier Greg Selinger has indicated that the Human Rights Museum at The Forks may be in line for more provincial money. Well, of course it is. No one ever locked down the costs of this thing going up and it seems no matter what the cost, it will be covered.

Many in Manitoba have already been very generous in donating privately and everyone else in Manitoba has donated through their taxes. However, the costs always seem to be a moving target. Selinger has asked private donors to dig deeper but has acknowledged the government will have to pick up the slack.

There are so many of these critical spending projects that the NDP government has committed to, it is starting to look like they will never get a handle on the deficit.

The museum might one day be a very good place to visit but how long will it take Manitobans take to pay for this and other projects?

It seems something is lost in having a human rights museum of renown when the place that hosts it struggles to get a handle on the borrowing that took to build it.

The museum has faced a lot of criticism as of late but one of the biggest sticking points is that the costs seem to be in flux at all times. Ultimately, the museum is a federal institution but so much of the costs of the place are being borne by the Manitoba taxpayer.