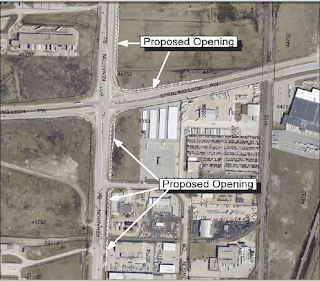 This Wednesday the vote will be held on continued Ikea road prep work. If you drive in the area, you know that work was left in progress. Barrels and pylons were left in place and it is a wonder there hasn't been a major accident in the area due to the fact that there are no warning lights at all.

The asphalt used between Shaftesbury and Kenaston remains rough despite assurances from the contractor that it is fine. I called my city councillor about it but she didn't seem concerned.

I hope some of the councillors will ask some key questions about the roadwork and will at least drive down there before nodding there heads in agreement.

I disagree that there will be no cost to the city involved. Already, it is near impossible to tell what lane to drive in. The barrels and barricades that cause you to veer around back and forth will eventually cause an accident. The icy roads, multiple painted lines that are faded or scratched out and pylons and barricades with no warning lights are no way to travel a major route in winter.