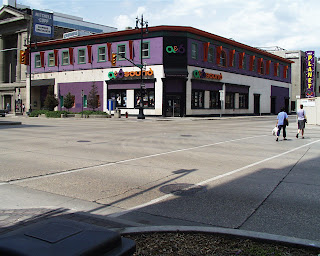 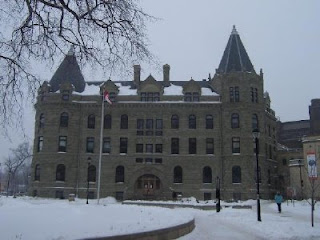 First picture: The A&B Sound Building back in its heyday.

Second picture: The University of Winnipeg

As mentioned in Portage Avenue Part 2, Portage Avenue is going through major changes. Some of those changes may be affected by a downturn in the economy.

For every step forward, there seems there is a step or two back though. Mountain Equipment Co-Op was a bold step forward. The closure of A&B Sound store was a step back. It remains empty even now. Prior to it being a music and electronics store, it was known as the Portage Village Inn. The building is on the market now but doesn't seem to have any takers.

Beside the old A&B Sound building is the Mitchell-Copp building. Like A&B, it is empty. North Portage Development Corporation has it targeted for redevelopment. Hard to say what could go in the building. It seems unlikely that a retail business would find it suitable. The best bet might be condos or a business looking for a unique office.

Probably one of the better news stories for north Portage is that the Red Apple store, closed for two months will be replaced with a Dollarama. This is a more attractive option for the building. This format store has seen success across Canada.

The Avenue building and the Hample building have new owner with new plans for condos, retail and restaurants. It remains to be seen whether they will follow through.

The only sure bet seems to be Dollarama.

It is tragic that following the construction of the MTS Centre and near completion of the Manitoba Hydro building that redevelopment of a large swath of Portage is taking so long and may end up being put off due to the downturn in the economy.

The only work that seems to be guaranteed work that is going on on the north side of Portage aside from Dollarama is the University of Winnipeg with its new dorms and faculty of science.

It remains to be seen whether other projects proceed. 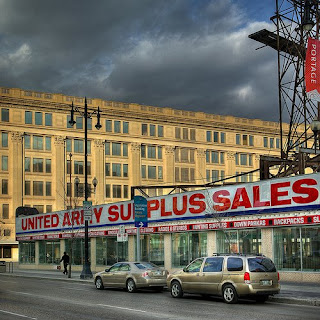 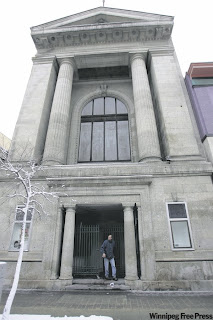 First picture of the former Mitchell Copps jewelery building from the Free Press, Second picture from Winnipeg Love and Hate.


The north side of Portage Avenue has been suffering for many years while the south side always benefited from having The Bay and other strong retailers as anchors. Even after Eaton's closed in 1999, the street still had considerable vitality.

North Portage has never had the same attractions as what lay across the street from it. Subsequently, as suburbia grew, the north side started to see some deterioration through the late 1970s and into the 1980s.

As mentioned in my post on Portage Place, many people believed something needed to be done about the proliferation of for lease signs and general seediness the street was acquiring.

In the very early 1980s, the north side appeared blighted with an adult movie theatre and a few video arcades indicating how far things had slipped. Aside from a few gems such as Kennedy Street where some shops and restaurants such as Stage West dinner theatre continued to succeed, the area was crying for something bold.

In 1981, Lloyd Axworthy introduced the Core Area Initiative as an encompassing program to help revitalize the downtown. The debate about what the centerpiece of the program should be was intense. Axworthy thought an arena was the best idea. The Winnipeg Jets even then were angling for a new facility and many people forget that Axworthy was one of the early advocates.

As most know, the arena option found no support and in 1996, the Winnipeg Jets headed for Phoenix. Had they moved downtown in 1987 into a new facility, one wonders if they would still be in the city.

The idea that found widespread support was a downtown mall. And thus Portage Place was born in 1987.

However, this post isn't about Portage Place. It is about the rest of Portage Avenue and what resulted after the mall was built.

I think it is safe to say that Portage Place has been a mixed success. True, it brought some new commercial and residential development to the north side but the area immediately in front of the mall was not people friendly. Essentially, the mall turned its back on the street and access was controlled moreso through portals like a traditional mall. There were few retailers that had doors out to the street. Also, the overpasses that loomed across the street made many people bypass the street below altogether.

The interconnected second story links from building to building had an effect on the street level retailers below. Some opted to go the mall rather than stand alone by themselves.

Eaton's closed in 1999, the result of mismanagement over many years. The collapse of the store was not isolated to Winnipeg and closures were national. The Winnipeg store closure was notable for the sheer size of the store that closed. For the first time, it took the focus off north side rehabilitation. The idea of this large, hulking empty store was too much for government of business to contemplate.

Voila, the arena idea re-emerged and as you know, the MTS Centre was built in 2004. All things considered, the project from done with remarkable speed and haste. We will touch again on what has been achieved with the MTS Centre.

The areas farther east of the Portage Place Mall continued to deteriorate and many went idle in the 1990s and 2000s. We will touch on this later on as well.

Let's focus on what has happened west of Portage Place:

The area west of the mall faced fewer problems because it had a major office building and a hotel rather than numerous street level retailers. The Investors Group building, the Holiday Inn Express (formally the Relax Inn) and the bus station/Rice Building all stood between the mall and the University of Winnipeg. The Investors Tower and Holiday Inn were built at the same time as Portage Place. The Investors building took over some retail and the old Colony movie theatre. The Holiday Inn took over the scary Mall Hotel.

Of all the things that many appreciated, it was the removal of the Mall Hotel and its fortress-like architecture and violent reputation. The area considerably improved once it was gone.

in 2008, the University of Winnipeg has begun muscling its way into the block now that the bus station has indicated it is moving to the airport.

The plan is for the university to renovate 37,000 square feet for admissions and counselling. The Salisbury House might be turned into the campus' first student pub and the newsstand and east and west surface parking will all be leased out.

It will be interesting to see how the loading area of the bus station will be developed. It is an ugly, dark place at the moment.

The issue of the United Army Surplus building seems to have been resolved. It is too foregone to redevelop and will come down in 2009. I suspect that some developers will approach the university about how to make use of the site for the university and for others.

I don't think I am the only who believes that the site would be ideal for a much expanded university book store. Now that McNally has left the downtown, the area is devoid of a major new bookseller. The downtown could stand to benefit from a bookstore of the quality the University of Manitoba has at its Fort Garry campus.

myspace hit counter
Posted by John Dobbin at 10:18 AM 2 comments: 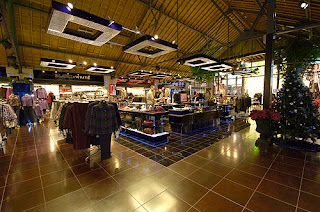 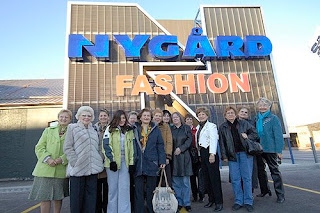 Pictures of the opening Nygard on Broadway and Sherbook on November 17, 2007. Pictures from Nygard's website.

Back in January, I wrote about the changes on Sherbook Street. The Free Press began to take notice themselves in in an article on September 29.

The part of the street the Free Press details is Sherbrook Street between Westminster and Broadway Avenues. On Broadway, as noted in the story, Nygard tore down a number of older buildings that housed their former retail outlet digs as well as some other retail and business operations. At one point in the late 1970s/early 1980s, a massage parlour graced the corner. The retail outlet itself back in the 1970s housed a disco.

Over time, a variety of businesses along Sherbrook succumbed to the deterioration in infrastructure or simply abandoned the area for better options. Salisbury House closed and was replaced by a police substation. That spoke volumes.

Nygard's store signified that something different was happening and although it has a big box look to it, there is no doubt that it has attracted people to its location.

Sherbrook and Maryland are mostly residential with mixed businesses located on the streets between the Assiniboine River and Portage. It has had its ups and downs over the years but the 1990s were years when it looked more down than up. Many of the houses in Winnipeg saw their value drop or remain static for a long time. Some of the streets such as Furby and Spence were in full decline in terms of safety due to crime.

In 2007, a fire burned an apartment/retail complex at Westminster and Sherbrook. The businesses didn't survive the fire. As I recall one of the businesses was a small massage therapy clinic and the other was a gift store on Westminster. I don't remember what faced on to Sherbrook.

The block was not salvaged and it fell to the wrecker in 2008. The Free Press says that Winpark Dorchester is reconstructing a 4,900 foot retail/office/apartment block on the site. A Subway restaurant will open on the spot and the apartments will be loft style affairs.

In April of 2008, Stellas Cafe opened their third location just down the street and opposite the Sherbrook Hotel. By all accounts, it has been a success and they are already building a patio. The building they renovated was a long since closed pharmacy.

It will be interesting to see what other developments happen over time. The downturn in the economy might delay further changes.
Posted by John Dobbin at 5:11 PM 2 comments: