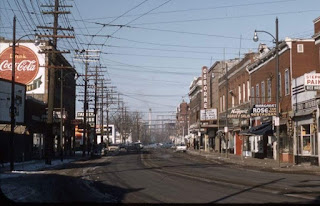 This picture in 1957 of Osborne Village tells us a lot. The first is that there are no more streetcars. They came to an end in Winnipeg in 1955. Trolley buses continue to operate as we can see from electric lines away from the Assinniboine River. But what about headed towards the downtown?  The building under construction in the background is the Great-West Life building that was complete in 1957. The steam pipe in the middle is the Drewery Beer Plant (later Labatt's)

The Osborne Theater, a fixture in the Village since 1912, was soon to close. Killed off by television in 1957. It later became an Elk's Hall and today is Anytime Fitness. Stephen Paints, Margaret Rose restaurant are clearly seen as neighbours to the movie theatre. The beauty salon is Nugguit's? It is difficult to read the names on the other side but a Perth's Drycleaner can be see as well as a drugstore. The drugstore sits where Papa George's resided from 1972 to 2012. However, it was once White Drugs which was owned by the Ringer family that owned the famous pharmacy on Pembina Highway. The store obviously had a different name before that though. 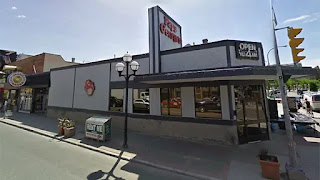 The Roslyn Apartments are seen on the right side of the street with its recognizable red brick. As with many street on major roads almost everything you wanted was within a walkable distance. The rapid expansion of the suburbs was just about to accelerate as cars and technology began to change urban settings.

Ironically, it was the harder time that Osborne Village was about to go through in the 1960s that set up what it was going to become from the 1970s and beyond. Even today the community continues to evolve.

Any help in filling in the blanks with the names of businesses on the street would be appreciated.
Posted by John Dobbin at 9:34 AM