The Pint Closing February in 2019 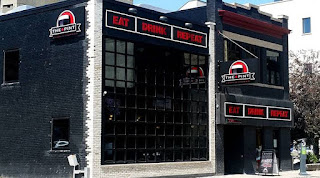 It is tough to be in the restaurant and bar business in Winnipeg. Coming on the heel's of Pete's Place closing less than a year after it re-located to Osborne Village, The Pint is closing in downtown Winnipeg after four years in business.

The Pint proved popular for the hockey and event crowd at the BellMTS Place just down the street from their 274 Garry Street location. There may be nothing more sinister about the closing other than they got an offer they couldn't refuse. Despite The Pint being part of a small five restaurant chain across Canada, they didn't own their building fully. The original reno cost just north of $2 million and required an equity investment firm to partner up to get it done.

According to employees the building was sold to the company that control Joeys restaurants in Canada. The company has intentions for the handsome building not for their Joeys concept but for their pub concept called Local Public Eatery. A cursory look on their menu shows standard pub grub and pictures of their Toronto location show a similarity to Winnipeg's Pint building. Don't expect to see wings though as there appears to be none on their menu. They do have HD TVs but it remains to be seen whether Local Public Eatery considers themselves a sports bar.

It would appear the fear though that this building will be empty is warrantless. This may only be an indication of a bigger player with bigger pockets jumping in and being able to buy the whole building and put their concept in a city that has already made them plenty of money though Joeys.

As for the Osborne Village, Pete's Place, which had operated for 17 years in West Kildonan could not make a go of it because of the high cost of rent. There are a few long term landlords in Osborne who have held onto high rent and seen high turnover in recent years. Osborne Village is not about to come up with a huge amount of parking out of the blue either. It needs foot traffic within its high density.

What we see in Osborne is being described as high end blight. In others words, high rent drives out the very thing that was attractive about a neighbourhood in the first place.

A number of cannabis shops have filled some gaps and a few bold businesses and new landlords have come to the fore. However, the neighbourhood remains in transition. The local where Pete's Place was may not be able to support a restaurant anymore. It may have to be subdivided to be affordable.
Posted by John Dobbin at 12:36 AM