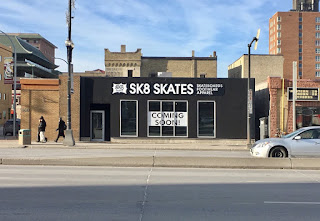 Since 1987 SK8 has operated in Winnipeg as one of the go to places for skateboarding in Winnipeg. The people who owned the store didn't just operate it, they lived the life and promoted as a sport as much a hobby. Even grizzled city councillors and other politicians started to recognize that chasing kids away from physical activity was not only self defeating, it was dangerous insofar as kids wanted ever so much to play but were being denied it.

It was stores like SK8 that kids and their parents felt at home and helped promote the wheeled sport to the point that parks were built specifically for skating both outdoors and indoors. In recent years SK8 has been down at The Forks operating close to the award winning skateboard park there. However, they have made a bold move to Main Street just north of city hall to a space that Christian Cassidy says has had quite a history. Certainly this is the most youth oriented the spot has seen in recent years.

Moving to Main might seen counter to most retailers thinking. However, skateboarder didn't get to be good at what they do without being bold. Moreover, the indoor skate park for kids is only a skate away at Higgins and Main. Kids are likely to be pretty fearless about going to the store. And for more timid parents there is parking in the back. By all accounts this week has been pretty spectacular for the store since moving.

The move by SK8 creates vitality on the street and the owners and employees seem to want to be involved in the health and safety of the neighbourhood. Raising money for causes dear to downtown helps.

The renovation of the building is handsome and very noticeable although the other day the street splash left them with dirty windows. The hazard of being on such a busy street.

Winnipeg is going through a fair crisis with drug problems as of late. This store and a sporting lifestyle is exactly what we need to see. A shining example when it is too easy to get down on what can be done to help with today's youth.
Posted by John Dobbin at 10:21 AM