Salisbury House Opens in The Exchange 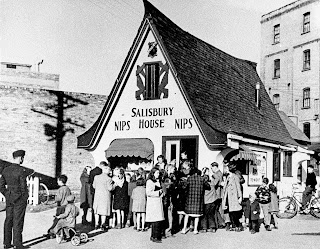 Salisbury House is a Winnipeg tradition and used to be right downtown. The first one in 1931 was just off Portage and Main and had what became the signature look in the picture above.

In recent years Salisbury House has seen their ownership stabilize and they've tried moving into new ventures such as seasonal stores and Xpress stores that are smaller than the main stores. There has been some success and some closures. 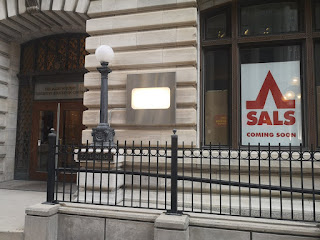 Surprisingly, given its history, there have been no Sal's downtown for some time. That has changed with the opening of the new Salisbury House at 177 Lombard right across from the Richardson Building. Brent Bellamy took a pic inside December 21 and they are now open.

The exterior and interior of the Lombard building is very handsome and the location is so close to the intersection as well as the Exchange District. The first floor there has been used for a variety of uses including restaurants but this particular incarnation might stick. Fancy and expensive business restaurants abound but a place to just grab a coffee and burger has value as well. And having your own table compared to a food court is good.

It should be interesting to see how this Sal's fits in to the business, arts and sports of the surrounding area.
Posted by John Dobbin at 9:47 AM