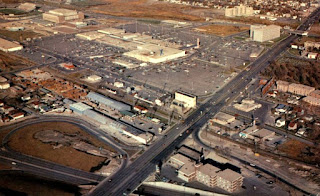 This photo had been identified as 1967 but no evidence of Eaton's Polo Park under construction and completed in 1968 nor of the Winnipeg Velodrome which would have been completed by for the Pan Am Games by this time. 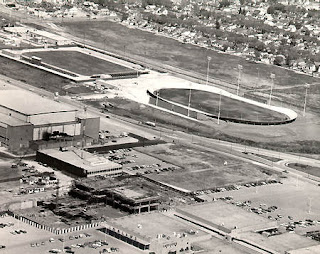 As seen in this picture, the Velodrome and high school football field is complete by end of May 1967. The Eaton's building in well under construction for opening in 1968 the following year. Take not of where Loblaws is at the bottom of the picture. It would to the Empress side in a face to face to death match with Dominion shortly after this.

It would appear the picture at the top of the page is around 1965 or possibly 1966 because land would been getting cleared for the Velodrome at least a year before the 1967 Pan Am Games.
Posted by John Dobbin at 10:39 AM