Portage Avenue in the 1960s 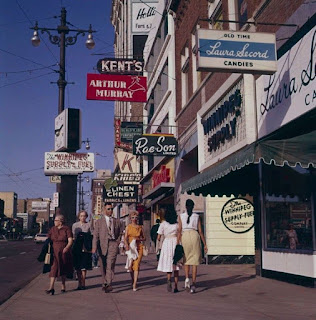 On Southern Portage Avenue in the 1960s, the Winnipeg Supply clock let everyone know it was time to be dressed up like Mad Men and Women for a warm day of shopping west of Eaton's. Dance lessons from Arthur Murray were required if you were to go to the Winnipeg Beach dance halls.
Posted by John Dobbin at 10:54 PM No comments:

Latinos Market just open on Osborne in the Village just as a year ago. The population of from Latin America in Winnipeg is small and numbers maybe 25,000. Some of have been here for a generation while a growing number have come for job here and in Brandon and Winkler.

In a previous post I mentioned that the fastest way for newcomers to the province to get ahead aside from a job placement is to be entrepreneurial and open up a restaurant or food market. We have seen that from every European national and ethnic group to come to Winnipeg. Now we are seeing it from Asia, Africa, Middle East and now Latin America. 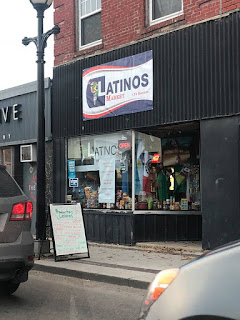 Many Winnipeggers travel to and develop a taste for Latin cuisine and want to try and cook that way when they return. The market stores help bring those products into town to serve that group as well as the thousands of Latin residents in the region. The location on Osborne also teaches Spanish.

The new location occupies the Kings movie theatre on Portage Avenue. Till recently it was one of the homes for Kings sporting goods and sister company to Royal Sports which has its roots in River Heights on Academy Road in the 1970s. Royal Sports continues to operate in the city. 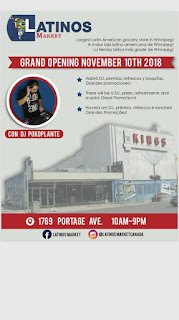 Portage Avenue West continues to show a renewed resilience with a few new businesses taking off. Latinos Market joins a list of those businesses that is changing the face of the street.
Posted by John Dobbin at 12:14 PM No comments: 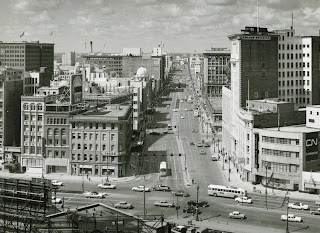 In 1964 the new Royal Bank building went up next to the recently completed Dreman building which has replaced the old post office building. Trolley buses still ruled Winnipeg streets and the present site of the Richardson building was a gas station and later a Hertz dealer till construction began. Coca Cola and Royal Dutch Shell had clock billboards on Winnipeg's most famous street corner.
Posted by John Dobbin at 10:03 PM No comments: