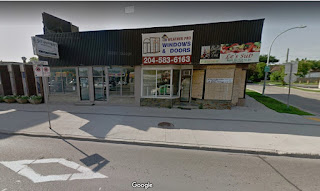 In the windows at Portage Avenue at Craig Street is the promise of Blady Middle Eastern coming soon. And the signage has gone up on the building. The previous tenants, a window and door company, a hobby shop and a restaurant, all have re-located in the last year.

There has been an influx of middle eastern, Arab and African cuisine in recent years as immigration as refugee numbers have risen. This is a common phenomenon with different groups looking to make a mark in private business. The way for the whole family to be involved is often a restaurant or food market. And so it has gone with Chinese, Indian, Italian, Greek and Portuguese families to list just a few.

Winnipeg has had an embarrassment of riches food-wise. This addition is fairly sizable on part of the street that has electronics (Advance) and music stores (Yamaha).

The Portage Avenue, Polo Park area has seen a burst of Middle Eastern fare go up. It is difficult to know if this is a result of any particular trend or of the reasons for it.
Posted by John Dobbin at 3:26 PM