King of Donair Coming to Winnipeg 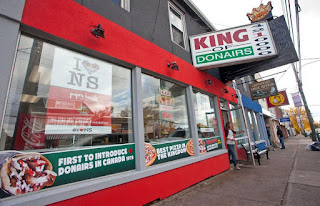 It has been reported the Halifax-based King of Donair restaurant group will be coming to Winnipeg soon.

Sooo, you ask: What is Donair? Well, it was invented by Greek restaurateur Peter Gamoulakis in the 1970s in Nova Scotia and is their spin on gyros.  It is a Turkish doner kebab of spicy meat served on Lebanese flatbread with a special sauce that is known in Halifax as "donair." In 2015, Halifax listed as the official food of Halifax. In 1973 the King of Donair restaurant was opened and the city now has four of them.

Edmonton will be the home to the first one in the west and a pop-up KOD opened in Calgary and had line-ups for 4-6 hours when it did. Winnipeg is on their list if western Canadian cities that they will be opening in.

Greek families in Canada have had a reputation of been hard working, entrepreneurial and in the food business. In Winnipeg there are many Greek-owned family restaurants and even one that serves donair. Across the west are many former Maritimers and they are likely to remember KOD fondly but the popularity already of gyros by Manitobans should make King of Donair popular.

No word yet on when and where they be opening but watch for an announcement.
Posted by John Dobbin at 10:33 AM