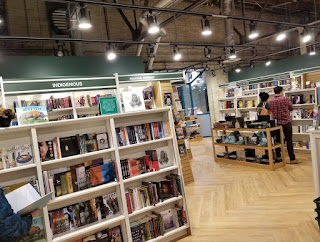 On Friday, just as Jets game was getting ready to go and The Forks was about to launch into another monster Festival du Voyageur. there was thing overlooked in all the hoopla At one point on Saturday a warning went out on CBC radio that parking all over from museum to Johnson Terminal was packed with people attending Festival and Mardi Gras at Union Station. For those people convinced downtown ain't got nothing going on especially in winter, it came as a surprise when seeing rugby players in an outdoor tournament by the ScotiaBank Theatre. It was cold out out! Yet, people walking and skating and enjoying events on both sides of the river.

The Common restaurant format at The Forks is probably one of the most innovative and mature decision made in Canada. It basically said it believed Winnipeg was responsible for enough for alcohol, food and retailing in an open concept and weren't going to treat it like a beer garden of...say...irresponsible rugby players. In fact, after play a few rugby players imbibed and asked: Does white wine go with bruises and ice abrasions?

As mentioned, given the high car and foot traffic making it to one of Winnipeg's top attractions, it was a little tweet that indicated a momentous opening was taking place. McNally Robinson has returned downtown for the first time in years. Their last presence in the area has been at Portage Place and they were still a going concern when they made the choice to move to Polo Park. It was a tough start there and they might have survived it had they also not taken up residence in a Toronto mall that was an unmitigated disaster. The creditors gave them a choice...retrench or die. Polo Park and their Toronto location closed and the Winnipeg Grant Park and Saskatoon location survived and eventually turned it around and were sold to principles who worked a long time for McNallys.

A book store at The Forks makes sense. It is where many in the city go to entertain, eat and shop and the events are pushing further out with each year. The truth is that bookstores are still relevant and the store itself will be an attraction there. We've waited a long time for the return of McNally downtown. Welcome back.
Posted by John Dobbin at 9:58 PM