Seasons of Tuxedo has confirmed Winnipeg's first Popeyes restaurant is coming to Winnipeg as well as the third location of Euro Food Dubromart in a building well under construction in front of the Outlet Collection of Winnipeg.

Osborne and Stradbrook Mall to Get Makeover 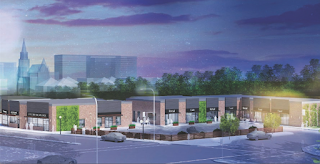 After 20 years with the same owner, the corner of Stradbrook and Osborne across from the firehouse has changed hands. It is has been pointed out in this blog a number of times that there are few actual owners of entire strips of Osborne as they have remained tightly within the families who were to invest in the street. They owned and operated businesses from the 1970s till now although a number of long term retailers and restaurants have closed.

A number of vacancies have lingered on long as rents are very high for newcomers. As a result, thoughts of sub-dividing properties for a better mix of tenants has been proposed. For some owners, it has become a good time to sell. And so it was at Stradbrook and Osborne where Jeckyll & Hyde's pub and the Stradbrook Chiropractic Centre reside amonsgt others.

The corner which includes 16,000 square feet of lease-able property and 50 parking spots has some of the highest traffic counts in Winnipeg. The property was purchased for $4.25 million and an additional million is being invested as part of the site improvements as detailed in the picture. The previous owner had not too much in the last 20 years in terms of the overall design.

Over the next months it is expected that several properties will be re-developed and leased along Osborne. It is obvious the value of the property remains high and some of the long term landlords are now cashing in.
Posted by John Dobbin at 10:37 PM No comments:

Loka to Move to Academy Road 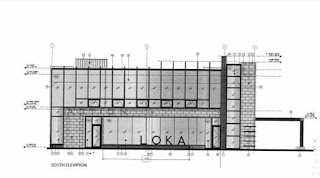 The former home of Moule at Academy Road and Niagara shut down this year and was promptly demolished. Presently before zoning is a plan to build a new two floor building with the retail store Loka occupying the first floor and a physiotherapy clinic taking the second floor.

Parking will remain limited along the side but street parking on Academy can accommodate a number of cars. Loka is presently located on Corydon Avenue at Waterloo Street but for a time was on Academy Road near Lanark Street until it and combined with a Richardson Concourse location in 2014.

River Heights continues to see growth of the commercial sector along Academy. This past year saw controversy over a medical clinic going up near Borebank Street.

The new business should not be as much of a concern as it replaces a business that was already there.

Local businesses that actually serve the local area are probably less of a burden than traffic that races through destined for somewhere else. And as far as parking in the area, this is a reflection that many homeowners own two, three or four cars in a family that do not fit in the generally one car garages ob the neighbourhood. Hence, thousands of cars parked  between Wellington Crescent and Taylor in all of River Heights in front of homes.

Loka and athephysio clinic are likely to be up sometime in 2018.
Posted by John Dobbin at 12:26 AM No comments: 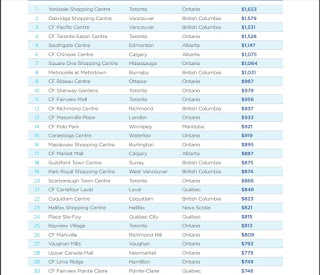 In 2017, CF Polo Park continued to be one of the top malls in Canada based on sale poor square footage. As expected, Toronto took the top spot along with a few Vancouver malls rounding out the top 3. However, Winnipeg's largest mall came in at number 14 in the listings.

In other categories such as total square footage and most pedestrian traffic, none of Winnipeg's malls ranked in the top 10. Surprisingly, Garden City Shopping Centre had higher sales per square footage than St. Vital Centre. On the face of it, St. Vital has more retailers but obviously more does not equal higher sales.

There were no figures for the Outlet Collection Mall as it just opened this year.

The top four Winnipeg malls will all be dealing with the closure of Sears much like much of Canada. For malls like Polo Park, it represents an opportunity to land Nordstrom's or Simon's. The fully leasing of Polo Park's off campus building in the former Target takes that property off their books. HomeSense/Winners, 24-7 InTouch Call Centre and Cineplex's Odeon's Rec Centre moving in.

It will be interesting to see how replacing Sears in the top malls will affect sales. For some malls who saw Sears leave early on in their woes a few years ago, the sales jumped considerably.

The Retail Council of Canada which conducted the study indicates the Winnipeg has less retail than Alberta but more than Greater Vancouver. It will be interesting to see where the latest building of retails puts the city on the listing next year.

It is believed that Polo Park is looking at a major upgrade being announced soon with the redevelopment of Sears. Sometimes it is lost in the haze of the redevelopment of the old Zellers on the second floor that the mall has had the same decor for some time. It is going to be quite a whirl because four city malls will be in a race to fill their empty Sear space this year.
Posted by John Dobbin at 10:19 AM 2 comments: 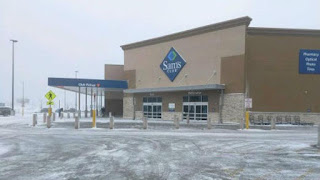 On the heel's of Walmart announcing they were raising all their employees wages, the company announced that they were closing one of the two warehouse Sam's Club in Fargo/Moorhead, North Dakota/Minnesota putting 168 workers out of a job by January 26. The store  closing is along the Interstate heading to Minneapolis close to the Menard's in Moorhead, Minnesota.

Unlike Sam's Club in Grand Forks which was built soon after Walmart, the Sam's Club in Moorhead is distant to the Walmart Supercenter which is deeper into the city. This might have proved too problematic as the two stores feed off each other's customer draw.

Costco entered the Fargo-Moorhead market just a number of years ago but they chose their location in the rapidly expanding south Fargo area down from West Acres Mall. The old gentlemen's agreement to have Costco and Sam's staying out of each other's market appeared to have turned into a war.

Unlike Winnipeg's three Costco's which are always busy, Fargo-Moorhead's warehouse stores often have emptier parking lots. This is true of Sam's and Costco's locations. Truth is the U.S. is more over retailed than Canada is and that's saying a lot. It is also adopting online sales at a greater pace than almost anywhere as well.

Store closures can be seen as an opportunity. While West Acres in Fargo and Columbia Mall in Grand Forks have been greatly bruised with the closures of Sears and J.C. Penny stores, they can re-purpose their malls to smaller and more profitable sized retailers and restaurants. Moreover, stores like Kmart that closed in Moorhead only a short time ago have found new regional players like Runnings move in. The 86,000 square at that location became the 16th in a Minnesota-based Runnings group focused on farm and outdoor sales.

Meanwhile In Winnipeg, the last Target will soon be home to a call centre, Winners/Homesense and Rec Centre. That concludes the leasing of all the former Zellers/Target locations in Winnipeg.

The 63 Sam''s locations closures are sad and in some cases shocking to those that worked or shopped there. Sam's in Moorhead was only built in 2014 and occupied 186,000 square feet by a highway. Alas, it was not enough and for Winnipggers who have Sam's memberships (and there are a few), they will still have Grand Fork and West Fargo's Same to shop at.
Posted by John Dobbin at 11:45 PM 3 comments: 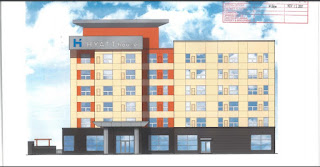 They put in an application in May and now it is revised for Hyatt House Hotel in the Seasons of Tuxedo. The six story 135 room L-shaped hotel will be out towards Sterling Lyon Parkway in front of the Seasons apartments and Cabela's.

The revised plans include better landscaping and fencing for the space. 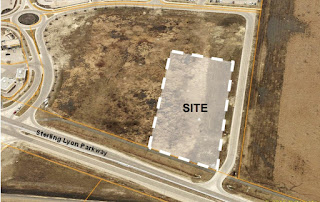 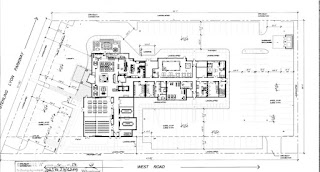 The plans still leave a lot of space which at a guess could small shops or services or more likely a restaurant but nothing is on the books yet.

Across the street in the Outlet Collection Mall and several condos and apartments. The transformation has been dramatic along the street in only a few years.

Hyatt will join the Hilton as the first two hotels built in southwest Winnipeg since the 1960s.

The obvious needs of Sterling Lyon Parkway/Wilkes are going to be more stark in the next months to years. Still, no money for road expansion beyond Shaftesbury Boulevard seems to be in the cards. On the plus side, the city is in surplus this year which is very likely the result of projects like this that are bringing in new taxes in infill areas.
Posted by John Dobbin at 12:35 PM No comments: