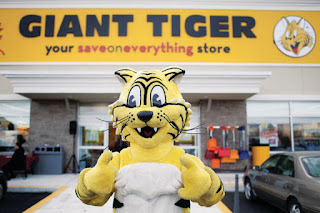 The closure of Price Chopper brought sadness to many when it happened earlier this year. It was a favourite for restaurateurs and those looking for fresh produce in their regular food purchases. It became an orphan in the Sobey's purchase of Safeway when the federal government ordered the divestiture of some stores for the sake of competition. In Winnipeg that meant four Safeways were sold as well Price Chopper. Red River Co-Op bought four stores getting back into the grocery business after decades on the sidelines and the North West Company bought Price Chopper.

For some time Price Chopper continued operations but it was the odd duck in the North West operation. In Canada the historic company dominates the north with Northern stores. In more recent years, it holds the master franchise agreement for Giant Tiger in Western Canada.

Co-Op stores found out just how aggressive North West Company is on expanding Giant Tiger when they went to re-sign the lease on the newly acquired Main Street store. The owner of the building said no thanks and sent them packing with little in the way of explanation. That was kind of bewildering as a grocer is a prime long term tenant to have. Moreover, Co-Op offered to buy the site which could have proved lucrative as well.

In the end it was Giant Tiger who kicked Co-Op to the curb. The new store there is open and while not completely a grocery, it offers a general merchandiser where there was none. It will be up to residents to decide whether they are better served than they were in the past.

It is difficult for some not to think the fix was in for Price Chopper. It is prime property on Pembina Highway at the entryway to suburban neighbourhoods. As the kind of store it was, it was always going to be kind of a niche. It wasn't surprising that an announcement came saying it was closing. But lo and behold, the owners North West Company has Giant Tiger to salve the wounds. This wasn't announced till later though.

This past Saturday Giant Tiger opened to fanfare at 677 Stafford. Expectations are that it should do great business where it is located. At just under 20,000 square feet, it joins 240 other Giant Tigers in Canada with a growing number in the west.

The neverending underpass construction along Pembina Highway still has a long way to go. However, Giant Tiger should be able to weather the long wait and be successful where it is. They occupy a part of the market that Zellers was just able to hold onto and where Walmart, Superstore or Target wanted to go. They have become a Canadian success story.
Posted by John Dobbin at 9:51 AM