It has come down to Game 5 in the championship of the American Association of baseball. The Winnipeg Goldeyes, defending champions from last year, played Monday night against the Wichita Wingnuts down 2-1 in the best of five series and in a must win situation. The Fish didn't disappoint. It was the bottom of the 9th, two out and Casey Turgeon up to the plate with Wes Darvill at second base hoping to be the tying run in a 3-2 game,

The pitch came and Turgeon swung and it appeared to a ground out. The Wingnuts came out on the field jumping up and down thinking they had won the game. It was not to be. The umpire had called balk and the last pitch didn't count and a clearly dejected Wingnuts had to head back on the field. With no time to even think about it, the inning continued and this time, Turgeon blasted it and brought Darvill in for a run tying the game.

The incredibly exciting Goldeyes had done it again. They had taken the game to extra innings. What happened after that was history making baseball. Just as the Winnipeg Jets game ended in overtime shoot out down the street and people were headed home, the Goldeyes were battling it out with the Wingnuts in front of 3.500 fans for three more hours!

It was around midnight that social media picked up the fact that game was still on and people started to watch on streaming video from the league's website. The excitement grew as inning after inning went by and clock ticked close to 1 AM. It was then that Goldeyes finally got a walk that advanced them to home plate and they took the game. 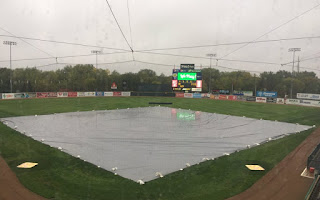 Tuesdays thundershowers have postponed the final to Wednesday, September 20 at 6 PM. The forecast is for sunny and 19 C.

The Goldeyes have been playing inspired ball all season and never say never. It has been a wonderful season and it comes down to game 5. Go Fish go!
Posted by John Dobbin at 10:51 PM