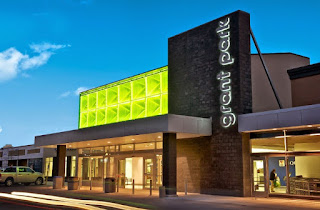 After so many years of construction at Grant Park, so many changes, it is not surprising that some businesses inside were just not able to survive. Autumnbee's Pizza in the former Pizza Place location just down from the Landmark Theatre has closed. It might have been inevitable that this would have been the fate. Almost all full service restaurants in malls that don't have their own entrances to the outside are gone now.

It probably was particularly cruel to see Fionn Macool's going up in the parking lot, yes another casual dining competitor so close.

It used to be that the old Pizza Place was one of the few places in the dense neighbourhood where you could get a bite before a movie or the Grant Park arena or in the restaurant desert that was River Heights.

For the first time in a very long while it appears that Grant Park has achieved a final lay-out that should be sustained for a number of years. Winners, Canadian Tire and Goodlife are all in place and should be there for some time to come.

Neighbourhood changes south of the mall are also likely to bring more people to the area and the mall is well positioned now with a complete fresh look.

It is sad to see the longtime pizza joint close down but is just a matter of time that we see the movie theatre become licensed and begin serving more diverse food samplings. They may have closed just in time. It remains to be seen in another restaurant takes over the site or whether it will go retail.
Posted by John Dobbin at 9:28 AM