Shoppers Mall in Brandon is the biggest retail center in Manitoba's second largest city. The chaos of the last few years which has seen stores like Safeway, Zellers, Target and others merge or close has left many malls scrambling to replace vacant spots. At 367,000 square feet the Shoppers Mall is sizeable enough to attract major retailers. However, Morguard Real Estate had decided the mall needs a freshen up and a few new stores and will pay $30 million to improve front entrance and common areas.

Outside the mall and occupying the parking lot will be Brandon's first Swiss Chalet and Harvey's locations. 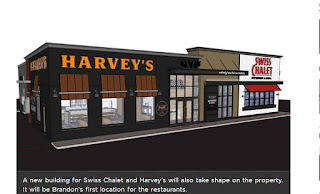 Also joining and sharing space with Fionn Macool's restaurant will be Brandon's first East Side Mario's.

Other retailers inside the mall are to be announced closer to the 2017 completion of renovations.
Posted by John Dobbin at 9:22 AM