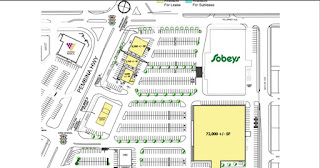 It took an incredibly long time to replace the Safeway that closed in 2014 in Fort Richmond Plaza. Speculation was rampant and people looked on despair as the ramshackle and outdated shopping center rotted with no plans being put forward.

This comes to an end January 29 when Sobey's Extra opens up. At 58,000 square feet, it will be bigger than a lot of grocery stores out there. It will be much more than what was available previously on the site. That is to be expected with not only Fort Garry but St. Norbert and nearby Bridgwater seeing more people move in.

The Extra in the Sobey's is more staff dedicated to customer service such as in-store chef. There are also specialists called ambassadors who will on hand in various food sections. Cooking classes, sushi bar and noodle bar will mark the location as different from other stores.

The store opens 9 AM Friday and offers $10 gift cards to the first 500 people in the door. There will be also a selection of exotic foods to taste.

The store will employ 100 people which in today's market is welcome news. The refreshing of this particular shopping enclave is likely to attract other merchants after being empty or under-utilized so long. 2016 will be a fairly good year for new grocery stores to open after a number of years of closures.