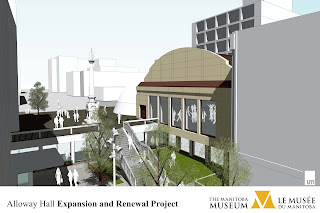 The Canadian Human Rights Museum has been getting all the glory, the budget and the capital investment from private donors and government but the Manitoba Museum has announced a $160 million plan as Manitoba's 150 birthday looms.

The first stage of the building is an expansion of Alloway Hall to just under 10,000 feet to bring in larger touring museum programs like the recently completed Real Pirates! The closure of the 20,000 square foot MTS Exhibition Hall showed Winnipeg just how many shows out there we could get with the right sized space. The space needed for a museum tour might be smaller though. Still can't help thinking it would have been better to go with an extra 10,000 square feet.

Five years ago, I practically begged for a new science museum for our 150 birthday. I looked longingly at the parking lot north of the museum and suggested a connecting tunnel. Now, it appears the major aspect of the museum expansion will be a $100 million science gallery on that very parking lot.

The $100 million pricetag is about right. The Science Museum of Minnesota was built in 1999 for $99 million. It is a gorgeous building but it was built with flaws and now requires $26 million of water damage repairs. Manitoba can't afford to have those type of mistakes. The exhibits the Minnesota Museum has are outstanding and one can imagine how successful such a gallery would in Winnipeg.


The $5.3 million Alloway Hall expansion will just be the first part of what we actually see of the museum work. So much else is in the planning stage and the sources of funding still not announced. The province announced $10 million for the the $16 million initial phase.

The timetable and other funds beyond 2020 are yet to be determined. Hopefully, it won't have to wait till Manitoba's 200th birthday.

The Manitoba Museum's yearly budget is just a fraction of what the Human Rights Museum. Ballpark is $4 million versus $20 million. Still, the provincial museum punches above its weight class. It is time for a big capital project to ensure the museum continues to do what it does best which is entertain, inform, preserve and educate.
Posted by John Dobbin at 10:38 AM