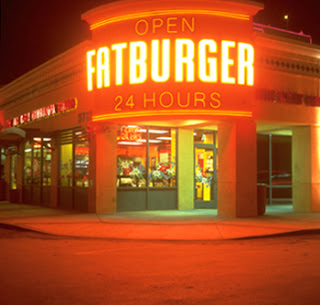 Fatburger will be opening soon in the the Seasons of Tuxedo development alongside the IKEA.

New signage went up late last week for the several new stores and restaurants. Bouclair Home sign is all lit up at night and the store officially opens today. On Monday they snuck open. The 8000 square foot store is new to Winnipeg but no stranger to the rest of Canada.

A conglomeration of restaurants opens in April across the parking lot from IKEA and Bouclair's. The signage is already up for Pita Pit. The other restaurants coming are Subway and Taco del Mar.

In the same block of restaurants will be Winnipeg's first Fatburger. The California chain already has locations across western Canada. The very famous hamburger joint also has fairly famous owners such as Magic Johnson as well as franchise owners like Montel Williams and Kanye West. It is also mentioned in many west coast hip hop and rap songs.

Coming hot on the heels of Five Guys Burgers, Winnipeg now has a very crowded premium hamburger joint in the offing.

Further construction in the Seasons of Tuxedo site is still underway with the only sign up indicating Mr. Lube is coming soon. A stand alone casual dining restaurant and Lowe's looks to be underway in the early stages.

The Cabela's looks very close to completion. Bright lights on the inside and many worker vehicles every day suggest it won't be long till we see Canada's biggest Cabela's open.

This is all part of stage 1 of the development. It remains to be seen what comes in stage 2 and stage 3.
Posted by John Dobbin at 12:18 AM