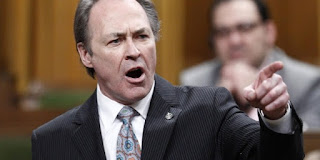 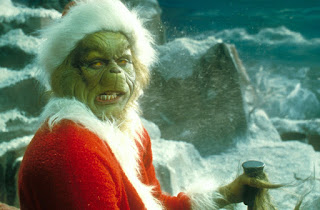 Pat Martin...Before and After Christmas Season

Pat Martin courts controversy. As an Opposition MP, he has come to realize that theatrics are sometimes the only way to get noticed in the world. The problem is that the theatrics displayed by Martin are laced with violent anger and menace. While this might play well in an alcohol filled night at the union hall, it doesn't sit well with grandma around the Christmas table. She would have pulled Martin by the ear and washed his mouth out with soap.

Anger has marked many of the outbursts we have seen from Pat Martin. I don't know that Jack Layton ever dressed him down but Tom Mulcair, who has gone through a makeover to soften his how fiery persona, probably has told Martin to cool it.

The latest late night Twitter blast from Martin resulted in a half hearted apology and a deletion of his account. If only it were that easy to correct his regular outbursts. He does no credit to the NDP and certainly shows he is not a future cabinet minister in waiting or representing a government in waiting.

There are only two NDP members from Manitoba. Care to guess which one has the inside track on a cabinet position if the party ever forms government? It is Nikki Ashton up in Churchill. I can imagine that make Martin very mad. Or he is content to knock about like a bull in a china shop?

Every time Pat Martin explodes, it draws focus to his actual duty as a MP for Winnipeg Centre. This isn't always a good thing. The attention is often drawn that he doesn't live in the riding according to one radio station? Where does he live? By all accounts...out west on the coast. Is this true? I have idea but it draws comparisons to a certain mayor who resides as much as possible under the tax laws in Arizona.

And what of his achievements as MP? Well, Martin would probably point to getting Gordon Bell High School the sports field on the old Midway Chrysler lot or getting the government to drop the penny. Well, let us look at those particular things. In terms of Gordon Bell, Martin was asleep at the wheel when the much better suited Murray Chevrolet lot across was available. And it was students at Gordon Bell who advocated for a sports field when people like Martin let them down. As for the penny, it will end up costing way more than anyone thought possible when eliminating it. Like a lot of NDP ideas, expect to pay more for them in the end.

So what can we expect of Pat Martin in the future? Well, so far...it looks like more of the same. He is likely to blame others for his violent outbursts and anger. He will still take his riding for granted and think they don't really care where he he lives. And he will continue to miss critical issues in his riding or propose policy ideas that cost lots of money.

To the NDP, I ask: Is this the best you can do? If Winnipeg Centre is one of the safer ridings in the country for your party, why put an inferior product out front? Perhaps nothing can be learned from the NDP defeat in Transcona. True, robocalls might have played a part but did anyone in the NDP think that Jim Maloway was the best you had to run there? And now he is back to provincial politics and likely to sit on the back bench forever as no one thinks to ever put him in cabinet. The NDP lost one of the safest ridings in Canada because they took it for granted. Could this be true for Winnipeg Centre in the future as well?

Pat Martin cannot help but be Pat Martin. It is up to the NDP to decide if this is good enough for them because it is the party that this reflects very badly on.

If the NDP can't pull their heads out of their backsides, they find themselves shut out of Manitoba in the same way they are shut out of Saskatchewan. They need better MPs if they ever hope to form and keep in government.
Posted by John Dobbin at 10:44 AM

First, did you mean Winnipeg Centre rather than Winnipeg North Centre? The latter does not exist.

Second, the NDP holds no federal seats in Saskatchewan because the riding boundaries are ridiculous: there are no all-urban ridings in Saskatchewan, which works against the NDP. There is a proposal to create five of them, but of course the Conservatives are unhappy with this concept.

You are correct. I often forget the "north" part was dropped back in 2004.

However, let's get back to the point of this...Does Pat Martin help or hinder NDP efforts to become the government. I think the answer is they do hurt.

And one would think that with so many areas of the province being held by the NDP provincially, they would have more seats federally. Could it be that they don't have very good candidates?

I don't know if Pat Martin has any effect outside Manitoba, but if I were Tom Mulcair, I'd be looking for a challenger from within and grooming them.

The bigger obstacle to the NDP becoming government is a lack of growth potential. Where can they gain seats, realistically? The Saskatchewan proposal can't hurt them.

The NDP candidates in 2011 were mostly awful. They can maybe get back Elmwood-Transcona - I had to look up who their current MP is;
Winnipeg North will be more difficult because Lamoureux is pretty close to what Pat Martin should be in terms of personality, which makes him personally popular. You can be outspoken without being crass.

Ron: Pat Martin made the national media for his latest outburst. The comments on Vic Toews personal life once again put him in lawsuit territory. He is already going to court and stands a good chance of losing.

He hurts the NDP badly and I suspect he got a call from Mulcair.

I see seat gains in B.C. as the Liberals are unpopular provincially and the federal Tories are looked at with suspicion in regards to the oil pipeline. They could win seats in Saskatchewan but I don't assume anything. It may also depend on a collapse of Liberal support which may not happen with a new Liberal leader.

Kevin Lamouruex wins because no one in Canada is better at the constituency level. He wins NDP ridings because he out hustles everyone. As for Transcona, if they run Maloway again, I wouldn't bet the farm.

I have been a lifelong NDP supporter (even volunteered at Pat's office one election!). But I think Pats behavior may be hindering party advancememt. I applaud his lion-hearted determination, but ... time & place man.

Pat Martin's certainly a fan of colourful language (personally, every time I hear someone talk about "my mother would wash their mouth out with soap" I can't help but think "put your 1950s, nostalgic-idealized version of child abuse in the dustbin of history, please"). After all, it was quite mean to compare those who are promiscuous & rat-faced to Conservatives.

But I certainly disagree with your assessment that he's a "do-nothing" MP and wonder what the source of the claim that "he lives on the west coast" is.

Analyst: Vic Toews is also a bomb thrower who has hurt his own party and crippled legislation by shooting off his mouth. He is lucky he did not repeat his accusations outside the Commons or he might have been in court himself.

What you call child abuse is still listed by the American Academy of Pediatrics in 1996 as preferable to spanking as far as corporal punishment. In any event, I was speaking symbolically not literally.

The problem is that some NDP members seem to like all his name calling and cheer him on. The leader of the party doesn't appear to be such a person.

As for not living in the riding, the accusation came from CJOB. You can take it up with them. He has a retirement home in Salt Spring Island and spent lots of time out there but his ex wife got that property in 2009 according to the Free Press. In correspondence to the Sun, Martin said he has spent a lot of his holidays in B.C.

It doesn't matter to me one way or the other. It is up to the local people to decide if it is relevant.

As for doing nothing, I base it on what I have seen from other hard working NDP MPs. Pat Martin is the critic for the Wheat Board. After so many years in the House, this is as good as it gets?

I think the NDP could do better for a candidate? You think he is the gold standard?

What anti union hall stereotype are you talking about? I was a union member. My criticism isn't of unions. It is about MPs going rogue.

Anon: There one or two provincial NDP MLAs who would probably be better suited candidates to be sure. And most would likely rank higher for critic positions or possibly a cabinet spot in the future if the NDP ever formed government.

Analyst: Ah, I see where you said anti union stereotype. Union Halls socially serve alcohol and it is where members can blow off steam. A lot of colourful language is used.

Pat Martin's tweets sound like exclamations at one of these events. You think differently?