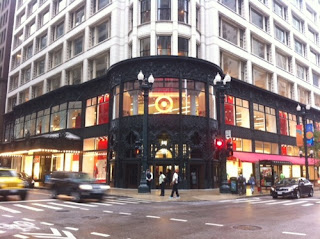 Target stores in recent weeks have opened their new urban concept store in Chicago to great fanfare. It is along a major transit corridor and built inside a beloved historic building. The store is smaller than their regular store and much smaller than the 180,000 square foot SuperTarget. Stores are scheduled for Los Angeles, Seattle, Portland.

Target already had two regular Targets in Minneapolis and Harlem, New York. The regular stores are not easily built or always suitable in large urban centres though. Also they are too large for the purposes of the company.

So what does a CityTarget have? It has food and quick service items for urban dwellers. Speed is what the store wants to offer cutomers. Get your milk and bread and oh, rain out...get an umbrella and light jacket. Quick, handy, urbane and needed.

With Zellers shutting downs its downtown store in the next little while and The Bay hanging by a thread along Memorial, one wonders if Target could be attracted to the location. And if not Target, one of the other retailers from the U.S. who are pushing hard for downtown locations such as Walmart.

The next big crisis downtown is The Bay.

In 2013, it is very likely the store will shutter the doors. If there is a retail chance in hell of saving the place, it will come from approaching companies like Target and seeing if it fits in their long view for Canada.
Posted by John Dobbin at 11:02 AM

No retailer would move into the Bay. the building requires way too much in repairs and likely would not be busy enough to turn a profit.

Then the only ones to afford fixing will be government and a government office. It is unlikely any private company would want to do anything with other than knock it down for surface parking.

The View from Seven said...

There are a few former downtown department stores that are being converted into mixed-use buildings around North America.

But to get a good sense of the direction Winnipeg is going in, go to Google Earth and type in "Department Stores in ___, __" (add any medium-sized U.S. city where the blanks are). Most of the cities with metro area populations of less than a million have no downtown department stores left aside from local Dollarama/Bargain Shop equivalents.

Seven: Then the future of The Bay could be demolition. The only one who could step forward would be government.