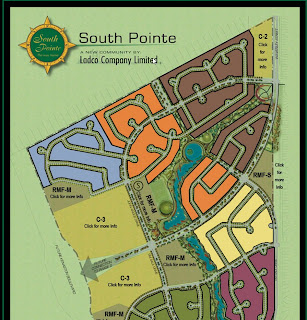 Northern section of South Pointe. It is alongside Waverley. 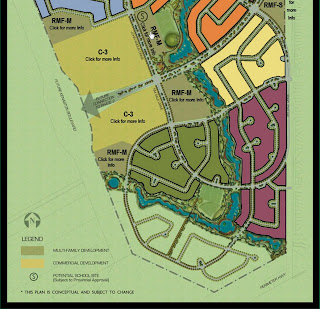 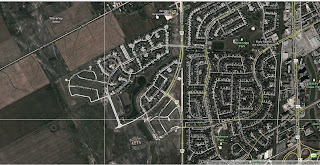 
South Pointe is a Ladco development alongside Waverley Street headed down to the Perimeter Highway. Most will know the lands as Waverley West.

In some respects the development is evolving like many suburbs do in the city. The area is flattened and then serviced lots are provided along a street system the developer outlines and houses are built. The total area to be built is 480 acres with 1500 single family homes. Only 25 acres is set aside for multi-family dwelling for 500 homes. Unlike Bridgwater, none of these homes has been built yet. One wonders if they wait long enough will South Pointe residents complain about later on.

Likewise, there is supposed to be a commercial element of 55 acres built servicing the area. None of that has been built but it appears it is concentrated along Waverley Street.

Included in the development is 30 acres of park space.

The unusual thing about South Pointe is the city planners are sending Waverley in a curve towards the Perimeter Highway. It did go straight down past the Perimeter to La Barriere Park at the turn off for Bison Drive prior to the development.


As anyone will tell you, it is now a speedway down Waverley to get to points of Fort Richmond, St. Norbert and La Salle. The road was once mostly gravel, oil and bitumen right through to the 1990s. It was never meant for the type of traffic it is getting now. It is hard to imagine it can support ever greater amounts of people. Most troubling is the lack of a proper overpass at Bison and Waverley. It is a bit of a blind spot where it turns.

South Pointe lacks a trail and sidewalk connection to other areas. With such a low density population, it hard to know what sort of public transit it will rate.

Some of the future problems of this neighbourhood are not the fault of the developers themselves. Winnipeg's planning department has not ensured that roads will be able to handle future volumes of traffic. Service roads around major shopping areas have not been built. Rapid transit remains a dream. Sidewalks and trails are not in place. High density hubs are lacking.

South Pointe in particular will bottleneck at Bison Drive.

The prospects for Bridgwater to the north are far better since they will have more access points to Kenaston and Waverley. Also, the neighbourhood is doing more to ensure that there will be fewer fights about multi-family dwellings since they are going at the same time everything else is going in. This will make public transit to the area far more reliable than a neighbourhood with only single family houses.

Some say all development in the area should be halted. As mentioned, this would probably push development to La Salle and Oak Bluff, beyond city control but still a factor on city roads and services.

No, what is needed is plan of action and the province, major developer of Waverley West should be on the hook for a major infrastructure change in the area. This means they should be contributing to an overpass, sidewalks and transit for the area.

Waverly will eventually run into Kenaston once the extension to the Perimeter is completed. The intersection of Waverly and the Perimeter will no longer exist.

Being a Resident of South Pointe, I appreaciate your blog, as you are adressing major traffic issues. It is quite unreasonable that no traffic lights are put in at John Angus and waverly as it is nearly impossible to cross the intersection! South Pointe features a very diverse community and homes. The land at the future waverly and kenaston intersection shows an outline for a possible diamond overpass. As for Bridgwater, the developer scraped the overpass plan, just imagine that traffic diaster. The Metro Transit service is similar to South Pointe as the "Rapid Transit" catergory. It only comes at rush hour in both neighbourhoods. Bridgwater is much closer to the U of M and Kenaston Common, but It is far from Schools. Since these are both "Family Orientated" neighbourhoods, shouldn't schools be a priority? Please keep us posted on more about Waverly West.