The Next Tall Building in Winnipeg 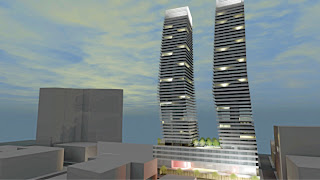 Skye Halifax is 150 meters tall in the planning process

Who will have the taller buildings in five years: Winnipeg or Halifax? Well, if the newly bold Halifax continues with development plans, it will be Halifax.

And Winnipeg? Well, who knows?

Now, no city should measure its success or virility based on skyscrapers. The completion of the Burj Khalifa is evidence that building a tall tower for the sake of building it could be quite costly. The tower has plenty of empty space and rents are 40% down.

Still, taller buildings supporting mixed uses can be highly effective in creating a vital community without the sprawl that taxes our infrastructure budgets and time management in terms of transportation.

So let's look at big Halifax project: It is called Skye Halifax and will have two towers called the Twisted Sisters standing at 48 floors each! The plan calls for a mix of condos and offices. The tallest building in the Maritimes now is the former Dalhousie residence building called Fenwick Towers at 33 floors. In actual height it is shade under 55 Nassau.

The height of Skye is 150 metres and the cost will be $350 million. There are still hurdles to pass as height restrictions have been in place in Halifax for some time so that buildings will not overshadow the Citadel. However, the grandiose design and the money involve have people re-thinking things. Perhaps it is because the old experience of Halifax and a tall tower is Fenwick. Unloved and unheralded in design, it likely made people cautious.

We'll see shortly if this Halifax project gets off the ground.

So what do we have in Winnipeg? 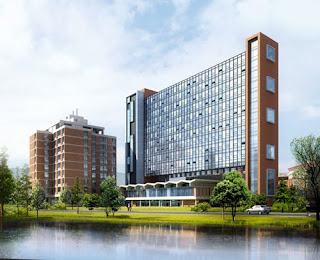 One of the buildings to go up with some height in the last year was the 13 floor Pembina Hall residence building in the fall of 2011. The cost for even this modest development was $42 million and the technical snags were many including students being caught in a failed elevator

Prior to that was the Manitoba Hydro building at 22 floors in the downtown in 2005.

The tallest buildings presently under construction are the Human Rights Museum and the Winnipeg Stadium.

Most other highrises are still in the planning stages or have been chased away altogether. The Canad Inns hotel at the Health Sciences Centre is under way now. The tower across from the MTS Centre is also under construction.

However, now we have to ask what next and where? And is it possible to build something greater 20 floors?

The conclusion would have to be yes if opposition doesn't scuttle the idea.

The quickest solution to getting some density and taller buildings might be to sell Portage Place parking to the developer who comes up with something for the two pads on the east and west ends of the mall. CentreVenture squatting on the mall parking does nothing to develop the site. Seems they could net some cash and kickstart either hotels or condos atop Portage Place.

It seems a missed opportunity with Winnipeg Square where the sale of the parkade could have kickstarted a hotel or condos on Trizec 2's pad.

The new construction of the Convention Centre might also be ideal for a few towers if multiple parties are brought together to see how to feed off the synergy of the main building.

Aside from a few obvious places downtown where an office/condo tower might work, there are some potential places in and around the vacated golf course for some residential development although the cries against traffic will be be loud.

A plan B for the Fort Rouge yards should be in place because it hard to see if they residences there will be built or not. There are some potential sites along Henderson, Portage and Pembina.

What will drive any tower in Winnipeg though will be residences. Condos will be needed for seniors, young professionals and for families who can't afford housing. Rental places are in desperate need.

It is unlikely we are to see an office tower of any height go up without the money that comes in from condos.

So will Winnipeg get on top of that?

Well, time will tell but it seems just as likely we might complain about any tower even if it was going up on a gravel parking lot in the downtown of the city.
Posted by John Dobbin at 5:02 PM

do you actually follow Halifax development or just come across these on SSP? those towers are never going to be built...

Imparkipeg does not kowtow to developers. Shut up & feed my meters!

Anon 1: I have been following a while now. Every time I think the project might go off the rails in Halifax, it gets approved to to the next level.

You have some different source indicating the project is failing?

I think it is Forks North Portage that is squatting on the parking at Portage Place, not Centre Venture. If I am not mistaken, revenues from this go towards running The Forks (which by itself is not a profitable operation).

The next skyscraper announcement in town will be when Centre Venture strikes a deal with a provincial department to build a 40 story office tower to house an ever expanding bureaucracy.. bet on it!

You are correct about the North Portage Development Corp owning the parkade.

They depend on the annual revenues as you say to sustain their other operations.

Still, a sale of the parking lot would bring in a lot of money to develop say the less desirable land next to CN Rail abutment opposite the Human Rights Museum.

Potentially, that could be another income generating parkade and atop it could be a hotel, condos...whatever.

Holding onto the parade could be a missed opportunity to leverage a few developments around the downtown.

I'll go out on a limb and wager that the next tall buildings in Winnipeg won't be glamourous downtown high-rise office towers or hotels, but rather more prosaic apartment buildings scattered throughout the city. Some of the projects that are supposedly in the works include the Whellams Lane apartment tower (not sure how far long that one is as I don't make it out that way often), the Fort Rouge Yards apartments, Assiniboine Landing - I can't recall if there are any others. These types of 20-25 storey buildings are not as sexy as the glass condos going up on a weekly basis in places like Toronto and Vancouver, but they should still make a positive contribution to the urban environment.

OMC, there is a crane at the Whellams Lane site but it has been there since the fall. Nothing happening.

Heritage Landing will be 26 stories.. That should make a nice addition to the skyline in the south part of downtown. Agree that new office tower construction is unlikely.

Halifax has less room to grown out and a smaller downtown (I think) so makes sense it would start to grow up more. Halifax/Dartmouth is close to Winnipeg in popuation.

We in Winnipeg have such a sorry looking skyline, a small clump of tall buildings. I predict that Saskatoon and Regina will soon be larger than Winnipeg. Sad but true, once upon a time, Winnipeg was the fourth largest city in Canada, but it just seems that all the other cities are moving on in size.

We in Winnipeg have such a sorry looking skyline, a small clump of tall buildings. I predict that Saskatoon and Regina will soon be larger than Winnipeg. Sad but true, once upon a time, Winnipeg was the fourth largest city in Canada, but it just seems that all the other cities are moving on in size.