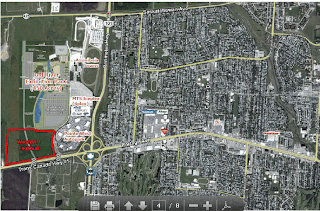 Plans and Location for Westport Festival

The Westport Festival is a new development being promoted by Shindico. It seems festival has replaced Centre, Plaza, Court, Common and Village.

I guess the developer thought a retailing concept called The Downs was too sad.

In any event, this development near the Assiniboia Downs is very large. How big? Well, bigger than the lot where Unicity Fashion Square used to be before being converted to a WalMart big box concept in 2000.

The Westport follows that same big box line with two very large box store locations with one unique difference. There is a listing for a large movie theatre complex on the site.

We have already seen that we are losing one discount movie theatre chain with the conversion Cinema City on McGillivray. What could this theatre be? First run movies, second run?

One thing is clear: The people of St. James and Charleswood have been under-served for years in the movie theatre department. The only real theatre in St. James was the King's Theatre and it closed decades ago. And the Polo Park Theatre in the deep dark recesses of the basement of Polo Park Mall was not worthy of the place.

Silver City Polo Park has been serving the west part of the city since it was built in the 1990s.

That is a large section of the city where kids faced a very long bus ride in some case or difficult to impossible access if they lived in Charleswood to any movie theatre. It was one reason that for a very long time, there was a lot of video rental places along Portage Avenue.

The 450 acre Red River Exhibition Park is immediately north of the site. The eight auto dealers of Pointe West Autopark is right next door on an equally large piece of land.

In short order, things are getting busy in this area. It is easy to see the streets serving a mall, Red River Ex and the autopark are not up to snuff. Work will have to be done to avoid a three ring circus there.

So what big stores might be looking at those retail boxes? Well, a good bet is Lowe's. However, could not Target be a possibility? Kohl's would be the next dream store for Winnipeggers but there are others coming like J. Crew, Brooks Brothers and Crate & Barrel.

Only time will tell but fully leased signs are up in a lot of the city malls and some retail street strips.

The other interesting element of the Westport Festival is a hotel. Like a lot of others, Shindico hopes to capitalize on the nearby MTS Iceplex and the need for hotel space for the teams going to tournaments. It is obvious that there seemed to be no need just to serve the Red River Ex and Assiniboia Downs.

There has been a flurry of hotels built in that area after years of nothing.

The stretching out of our infrastructure and the traffic chaos in Headlingley is a debate that should happen as this project starts to take shape. Nevertheless, the increasing fully leased signs all over the city means that if we are ever to get certain stores, they will have to have a place to go.

To that end, the city continues to expand outward. Perhaps city council will continue to try and backfill spaces without some of the NIMBY-ism we have seen in recent weeks.
Posted by John Dobbin at 6:49 PM

That said, I suspect a cinema would do well there if for no other reason than lack of competition. If you live in Assiniboia or Westwood and don't have a car, then Polo Park is the only option unless you're OK with a very long bus ride. Winnipeg generally seems under-theatred given that nearly all of the big downtown theatres closed years ago with only a handful of new suburban ones built to replace them.

Unicity's was certainly limited from growth west. If you lived in the center of St. James, you were just as likely to go to Polo Park as to Unicity.

Woolco was a poor draw for traffic.

At the time of the mall, kids were more likely to bus all the way downtown where the movie theatres were and do their shopping in a large size Bay rather than a junior suburban one.

Everything conspired against the location.

Put movie theatres on the Westport site and draw traffic for sure. Find the right stores and they should be quite successful.

However, watch for the area to rise high in the MPIC accident list just as Kenaston has over the years.

What a crappy "festival".

Those traitors in headingly separated from the city and now Sam Katz plans to sell our water and other city services to them? Disgusting! I'll never forget the war of '93. I lost an arm in the battle. That they continue to coast on their proximity to Winnipeg without paying proper tribute is an insult. Those smug headingliers. The border of Winnipeg includes headingly. They are part of Winnipeg, The city should refuse to do business with any entity that does business with Headingly or pretends that Headingly is a separate municipality, a la China and Taiwan. If I am voted mayor of Winnipeg, I will have our army invade and conquer those Headinglyites once and for all.