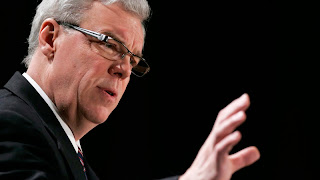 First things first. It was a classless act of Greg Selinger to go on with a speech before Hugh McFadyen went on. It is obvious the NDP were sick of waiting for a concession speech and decided in a classless manner to go on ahead anyway.

Seems they did not have the backroom guys call and ask what might be going on. Had they done so, they would have heard that McFadyen was contemplating what to say about his stepping down from the leadership.

Classless, graceless and stupid is all I can say.

I predicted a majority NDP government. I didn't see the PCs making gains in Winnipeg except for St. Norbert. The NDP squeaked that one.

I focused on rural Manitoba for the PCs to make any gains. It was an overall terrible outcome for party. Ridings they needed to pick up, they didn't. Even with an incumbent out such as in Swan River, the PCs failed. There was an increase in the popular vote for the PCs but translated into nothing.

Big brass ones. Those are game changers. Put the other side on the defensive.

The NDP used the power of their office to advertise and then they used their political budget to go negative. And often.

If you have some brass one that you show and someone tries to kick them. You kick back and you keep kicking.

Whoever the new Tory leader is, they will have to go on the attack and attack often. Go negative, go personal and do it often. Why? Because it works.

The NDP philosophy sometimes is summed up by classless. It can also be used to describe behaviour. We saw a lot of it in this election.

However, if we base things on outcome, the NDP way worked.

From my own perspective, I really did focus on ideas the parties presented. I was disappointed that there was not more innovation and vision. Only a highly partisan person would say that any of the three presented the best election campaign we have seen in Manitoba history.

There will be two new Opposition leaders in the next election, possibly a third if the Greens have someone new.

It will not all be peaches and cream for the new government. Continued weakness in the U.S. economy will hurt all of Canada. The deficit will not be easy to end. Healthcare costs will continue to rise. And violent crime will continue to scar parts of the province.

Some NDP were suggesting they might win even more seats in the next election. I remember when Frank McKenna won all 57 seats in New Brunswick. Eventually, you wear out your welcome. Or is possible we see NDP governments over and over again like Alberta.

I guess we see in the future.
Posted by John Dobbin at 5:31 PM

The next PC leader will have a lot to think about. They have to find a way to crack the tough nut that is urban Manitoba. It's not as tough a job as, say, weening rural ridings off of the PC's but still, just attacking hard and often likely won't be enough.

"It was a classless act of Greg Selinger to go on with a speech before Hugh McFadyen went on. It is obvious the NDP were sick of waiting for a concession speech and decided in a classless manner to go on ahead anyway."

I would expect to hear from the winner of any race to speak first.

@ Anon - The custom in Canadian politics is to have the party leaders speak in reverse order of finish, i.e. 3rd goes 1st, 2nd goes 2nd, 1st speaks 3rd and last. But it normally unfolds quickly... McFadyen's lengthy delay in getting up to the podium threw things off.

Fitting that Hugh took so long to come up with a speech Tuesday night -- he did little in his 5 years heading the party, so why change now.

You were spot on in saying an aggressive, game-changer policy platform was needed. It wasn't anything close to that, from the PCs. Why?
They had all the time in the world to come up with it. But no...Hugh sat and twiddled and let someone else set the pace. Opportunity after opportunity passed him by.

Worse, he's done nothing to lay a foundation for the party into the future. Does anyone think there's someone credible in the wings, able to take over?
Five years ago, the leadership campaign was a farce, an apathetic parody that made it clear no one wanted the job. Here we are, almost 2012 and nothing has changed one iota...there's zero depth on that bench.

Going negative will only serve to drive down an already low voter turnout. You were also correct in saying a game-changing set of ideas will crack the nut -- a positive, challenging approach.

Also - Hugh is on record as saying he decided earlier if he fell short of 30 seats he'd step down.
So presumably he had prepared for that contigency and wasn't spending the time Tuesday night scribbling an impromptu speech on a napkin somewhere...once again, he twiddled and wasted time.