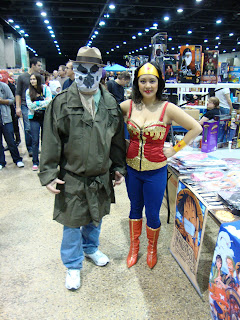 Me as Rorschach and my friend Wonder Woman

Halloween weekend and Central Canada Comic Con all on the same weekend. It certainly makes for a costume friendly weekend.

Sad to see the downtown explode in shootings and stabbings once again because there was quite a lot going that was peaceful and fun. It is quite ridiculous when you think about how someone's checklist for Halloween goes like this: Booze, drugs, gun, knife. Check! ready for my night out!

If this is left unchecked, it won't long before some people make a decision about going to a Winnipeg Jets game, convention center show, Concert Hall outing or The Forks based on fearing that they will be killed in their cars.

It will be useless telling people that perception is not the reality.

Anyway, I won't try to spin this story about how good things are. Suffice to say, I want to go downtown to Jets games, conventions and plays. I am demanding that things be better. And yes I am looking at you Mr. Mayor and you Mr. Premier.

Anyways, back to the convention that I attended...

For those interested in knowing, there were many people from very young to very old at the Winnipeg Convention Centre enjoying Central Canada Comic Con. Since 2006, it has taken off and thousands are in attendance. I suspect it will only get bigger.

There were some stars from TV and film present for autographs and question and answer not the least of which was William Shatner.

Met Kevin Sorbo who seems to be a genuinely good guy.

There were so many excellent costumes and activities that it was enough to keep most people engaged for hours. Wonderful show and you know it will only get better.

It is the type of show the Convention Centre has been doing so well over the years. Home show, car show, boat show. Literally thousands of people who generally don't go downtown for a host of reasons go to the Winnipeg Convention Centre.

I am not an expert on the economic activity generated by a Convention Centre. It is probably lots and although the costs are high to build them, I think they are worth it so long as they have the tools to generate some cash for their operations. Parkades can make money after the initial huge start up costs.

It is curious to note that developers are keen on buying parkades. There is high interest in Portage Place's parkade to spur a tower. This isn't a bad idea but CentreVenture should hold off till they get a commitment for both towers to be built on west and east side before selling. They should not think of this as losing a revenue generator in the parkade but getting seed money for further projects.

This weekend's convention had two decks of parking lot filled. It had every food service counter filled to capacity and probably more could have done business.

I think more revenue has to come from services provided from the Convention Center. It should have more restaurants, concessions and the like.

The plan for expansion that I have talked about here includes a hotel. This is a good thing and should be thought about in terms of how it can create further revenue and support for the convention center.

The Convention Center has been isolated too long from the rest of the downtown or Broadway by a selfish province that thought nothing about having huge surface parking lots spread out all around and no plan for doing better. Those parking lots were owned by the province and any thought of developing them till this year was rejected.

Here's hoping that enough vision is in place to try and make what works in the city work better and stop working at cross purposes.
Posted by John Dobbin at 12:52 PM

John Dobbins Journal. October 30th, 2011: Squirrel carcass in alley this morning, tire tread on burst stomach. This city is afraid of me. I have blogged its true face. The streets are extended gutters and the gutters are full of blood and when the drains finally scab over, all the vermin will drown. The accumulated filth of all their stabbings and murder will foam up about their waists and all the gang members and politicians will look up and shout "Save us!"... and I'll whisper "no."

Reed: I was going to mention that after the convention, I did a little cleaning up of the streets in costume. ha!

John,
You do realize there's already a massive hotel that is ATTATCHED to The Convention Center, right?

Anon: Yes, the Delta has been very successful and it has one of the highest occupancy rates in the city and attracts its fair share of special events and conferences all om its own.

The doubling of Winnipeg Convention Centre really requires a second hotel and additional parkade to service the increased traffic.