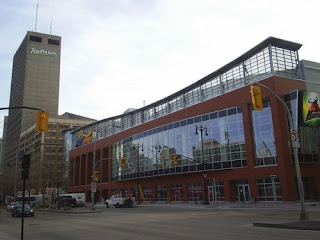 Like OMC, I was driving to work on Kenaston when I heard the CBC Radio One national news report on.

It was rather than disconcerting. I wrote last October about the Radisson Hotel renovations last year and how things needed to be cleaned up around there.

This was the text of Air Canada's message:

Ladies and Gentlemen, In response to several reports indicating questionable safety in the area surrounding the Radisson Hotel in downtown Winnipeg a Security Assessment was conducted, in conjunction with the Winnipeg Police Service, by Air Canada Corporate Security. Recent environmental issues have forced approximately 1,000 displaced people from rural Manitoba to numerous hotels in the downtown area. Instances of public intoxication, resulting in several downtown locations being susceptible to crimes of violence and opportunity, have been observed by local Police. Based on concern generated by Crew Reports, Corporate Security, and keeping in mind our obligation, to the extent possible, for ensuring the safety of layover locations, a decision has been made to relocate. Alternative downtown layover options were investigated, and while The Inn at the Forks is considered secure, as a boutique hotel they were not able to accommodate our crews. We considered locations available outside the downtown core and while our preference was the Clarion at Polo Park they, as well, were not interested in accommodating our crews. For now, we have arranged through API, to have Crews layover at the Sandman Hotel and Suites. Information on the Sandman Hotel and Suites is found at www.sandmanhotels.com/en/hotels/manitoba/winnipegairport.php. We will certainly revisit the downtown area once the present situation improves. Authorities anticipate displaced people to be an issue for another 12 months. Best Regards,

I have a few of the people who have been displaced by flooding as clients. None are too happy about their situation. In some cases, kids are still not back in school. Two governments are responsible for their welfare: the province and the feds. One government is responsible for the outcome of so may displaced people: Winnipeg.

It isn't just First Nations people but that probably comprises the bulk although who can say?

Winnipeg has a drug and alcohol problem. It isn't just solved by throwing Hell's Angels in jail. That goes after the supply. It doesn't do anything about the demand. And that demand is there. Legally or illegally, there are people seeking out substances.

We can go a long way to talk about addiction, prohibition and how legal and illegal all blend together. We need that debate. We should have that debate. One thing is clear though after that debate is that addiction is best worked on as a medical problem and that has been clearly supported by the recent unanimous Supreme Court decision. The Harper Tories sought to shut down a medical response in favour a criminal approach. The court pretty must indicated that pushing addicts underground who seek to minimize the harm they are in or end their addiction must have have protection under the law and province trumps federal government on that matter.

However, back to the Air Canada issue, it is obvious that that the company took a look at the situation. Much like how Western Financial decamped to Polo Park out of fear of downtown, Air Canada is going down the same route. The loss of Western Financial's 350 employees and 72,000 square feet of office is a particularly bitter pill to swallow.

The war of words on CBC's and the Free Press website over Air Canada's decision is ferocious.

So, here is what I've seen in my time living downtown. I am going to focus on the negative first, and then go into the positives, because there are lots of good things about the area.

Most recently, there has been a man hanging around outside my apartment every afternoon, and he bothers everyone that walks by for money. He's called me a bitch for telling him a) no and b) to get off the private property. Really, I'm a bitch because I don't want to give you money and because I don't appreciate you trespassing? Eat a dick.

My apartment has a convenience store attached to it. There's this wonderful Korean family that runs it and they are all super sweet. There's an ATM there I sometimes use. One day I came downstairs to use it and there was a sign on it saying it was broken. As I went to walk away, the owner of the store told me the machine actually worked, he just put the sign up because he was sick of the drug dealers coming in off the street to use it to conduct their business.

Some other fun things about downtown. Hmmmm... well, I live down the street from a Manitoba Housing complex that is full of equal parts welfare bums and unmedicated crazy people, all of whom seem to wander over to the City Place food court to loiter all day. There's one particular crazy man that will try to sell you anything he can steal. One time he tried to sell me a computer monitor for five bucks. A steal of deal, literally. Mostly, these people order a McDonald's coffee and then hang around the mall all day, smelling up the place, bumming smokes and change and in some extreme cases, publicly masturbating.

Last week a friend saw a man just hanging out, bleeding from the head, chilling at the fountain on the main floor. He also told me there were unsupervised little kids throwing pudding cups off the second floor.

It goes on. I recommend reading it.

I've seen Air Canada flight crews take some excessive harrassment from drunks as the crews tried to check in at the Radisson on more than one occasion. And I don't blame them for this move a second, however thoughtless a couple of their comments in their discussion of the issue might have been.

I do blame the people who persist in claiming that the solution is silence or propaganda. We need to stop talking about or excusing these problem, and to start demanding that certain indifferent public officials in both levels of local government earn their pay and fix the problem instead.

Other cities have cleaned up their downtowns and dramatically reduced petty, nuisance and violent crimes in public areas. We can, too, but only if someone gets off their ass.

People are going to feel defensive about the city and they should. The mayor Sam Katz ask lashed out about the decision. Don't know if he is Winnipeg today though. Did he call it in from Phoenix? And Greg Selinger will say that he has done his part. if that is true, what is up with Air Canada and Western Financial? Has the helicopter caught any aggressive drunks and panhandlers? Has there been some dramatic enforcement of provincial liquor laws or at the liquor stores?

We have had city and provincial continuity in leadership and downtown still has the same burning questions. It can't be brushed aside and no one solution will solve the problem. It has to be a full court press day after day after day.

However, there are too many wide swaths of vacant land that are only used for parking, too many neglected Manitoba Housing buildings, too many rogue bars, too many people with substance abuse issues or mental illnesses and just too few people living in the area to say: This is my home, it is unacceptable that this is happening!

I think it is safe to say that city and provincial officials need to dig deep and figure out how to solve the problem rather than bluster about how wrong people are to have negative feelings.

We can't help those feelings if they are related to lifestyle. We can help it if it is related to safety.

Building the downtown is going to have to be step by step so that a community is formed. It has to have a living component that thinks about how to make that area liveable, safe and attractive.

So what to do about the problem of the Radisson Hotel and perhaps the Air Canada building?

Well, first is to boost visible police and security presence. Drug deals can't be happening in the park outside of Air Canada. Panhandlers can't be loitering and aggressive at every bus stop and business entrance.

Larger issue of addiction and poverty will no doubt play a part but safety, security and personal responsibility will have to taken care of.

In the 1980s, the Exchange District around Albert and Arthur Streets was under siege from prostitution. It took a concerted effort and it was driven away. Sad thing though is it never ends, it just moves places.

Still, had the prostitution stayed, it is hard to say whether Red River College and others would have moved into the area.

The point is that if Portage Avenue suddenly became the safe and attractive place that people aspire to, elements of crime and poverty could move elsewhere if the underlying problems remain.

But first things first: address the immediate safety needs around the MTS Centre and hotels. Keep at them until the area takes on a vibrancy like we see at The Forks and perceptions will change because the circumstances have changed.

Next post up will be about something encouraging. The transformation around the University of Winnipeg.
Posted by John Dobbin at 4:56 PM