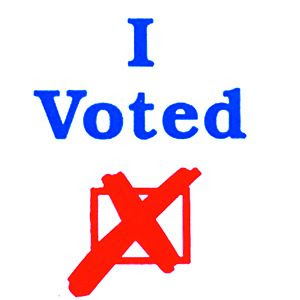 Hats off the Elections Manitoba for better ease in voting this year. Certainly this concept can go even further but the ability to vote in a variety of places for numerous days is the way to go. Someone who does not vote, does so knowing that they have a harder time blaming lack of time as the reason.

I am in the Tuxedo riding which takes in a chunk of Charleswood and River Heights. I expect no surprises in this seat as mentioned earlier. There are plenty of signs for Heather Stefanson, I see fewer NDP and Liberal signs than the last election.

I have been wholeheartedly unimpressed by the election thus far. I don't even go as far to say that the two main parties have a hidden agenda. They have no agenda except power and uninspired governance. The PCs and especially the NDP have been nasty.

I did look at all the platforms of the parties and try to see who the local candidates were. There were a number of items in all the platforms that I liked but I was singularly not impressed by the financials of anyone who didn't cost things out.

But who can blame the parties? It isn't like the federal Tories cost their programs even now. They introduce an omnibus crime bill and won't say how it will be paid for.

There have been two polls out in the last day from Viewpoints Research and Environics. One has the NDP up comfortably, the other has the Tories up marginally. The advantage still goes to the NDP.

There is probably one poll left out there in a campaign that had almost nothing to gauge what has so far been an unengaged public.

In the end, I cast my ballot for the Liberals for the best of the platforms but for a candidate who, aside from a resume, I didn't know that well.

In truth, no local candidate here really fleshed out a lot for me to grasp a hold of and make me think local politics mattered.

My centrist leanings and need for an option was fulfilled. It would be terribly tragic if we are left with even less choice after this election and into the next.
Posted by John Dobbin at 4:18 PM

I'll be voting Liberal too.

LOL, you voted Liberal, Why ? I mean just the Bipole issue , which they don't even realistically touch, should be enough incentive for a voter to make a decision between the other two parties. Not to mention tax credits for renovations and income tax issues. Tories also at least have a Municipal funding Plan, etc.

Besides, you voted early, what happens in the next few days and someone lands the big punch ?

Anon 2: The NDP and the PCs have both said they won't have anything on this issue of Sunday shopping. Nothing. There won't be any change from either of those parties on that issue.

On that, issue the Liberals are the only one to say let the retailers set their own time.

By the way, I hate most tax credits. They are catering to dividing the population. I prefer a general tax decrease as it is fairer rather than targeting voters. Conservatives love tax credits despite many tax experts loathing them for complicating the tax system.

I have looked at the platforms. I don't expect any knock-out punches because the level of nastiness so far has not had much substance.

I prefer having three choices in the legislature rather than two no matter how many people say it is us versus them. I remember when it was just two parties. That was incredible stuff. It was the worse, nastiest and most partisan time I have ever seen.

Who cares about Sunday shopping. Hate

" By the way, I hate most tax credits. They are catering to dividing the population. I prefer a general tax decrease as it is fairer rather than targeting voters."

Don't know how that divides a population but , if you say so.

What you prefer is obviously not what Liberals had to offer, at least Tories come closer. But then again, its your vote and that somehow makes sense to you.

Anon 2: Who cares about Sunday shopping? The Chamber of Commerce does and does everyone who lines up every Sunday at every store to get in. People are voting with their feet.

If the Conservative or NDP are confident that no one has an interest, put it to a referendum.

As for taxes, the Liberals had the best answer on payroll taxes according to editorials and some business commentators. Payroll tax is not on the Conservative platform. It isn't.

Look, I don't have to tell true conservatives what they already know. Tax credits are not useful to everyone. They are targets which have proven useful to getting elected. A fitness tax credit is not useful to those who don't have children or who don't have high enough income to pay the rest of the cost of a child's fitness.

I truly prefer an actual tax cut and tax credits are not better than no tax credit at all. I believe tax credits in Britain and the U.S. helped create the housing crisis we have today. Mortgage interest write-offs made people borrow more for more house, high debt. We don't have that in Canada.

I don't understand the PCs making the deficit last longer and not doing something on payroll taxes. It doesn't seem like a policy that would come from that party.