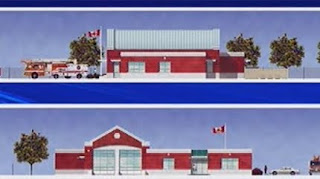 You take a look at it and a few other old fire halls and realize the buildings do need to be replaced.

At 5000 Roblin Boulevard is where the old Charleswood Firehall is. It looks like a fire trap all by itself. It served as the old municipal building and has been used as a firehall since 1974.

I won't debate the overall numbers of fire fighters in the city. Suffice to say, they should have the best equipment and better buildings as well as regulations that help with fire safety. Still, a review of numbers has to be undertaken at some point. While some stations are very busy, others are in newer, safer areas where fires are rarer and under better control. Were it not more fire fighters becoming paramedics, we might see some stations not as active.

The station will look familiar to some in Winnipeg. It an exact copy of the Sage Creek station.

There are a lot of infrastructure programs throughout the city of Winnipeg. We have had a tax freeze for some time. Unless we are seeing ever increasing infill and higher values on our present land, something will give at some point.

There is no doubt that crumbling obsolete buildings and roads have to be fixed but a close check will be needed on the costs.

Charleswood will benefit at this juncture with a new building. It won't benefit if there is a budget crunch and huge tax increases.

There has been a certain amount of build up in how bad things have gotten for infrastructure. It amounts to a deficit of another kind. And one that will we all eventually pay for.

It is hard to see if we are going to change that type of growing deficit in Winnipeg.
Posted by John Dobbin at 3:52 PM