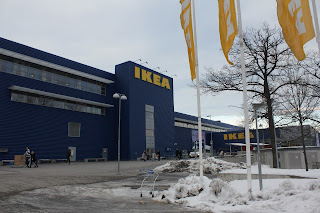 The Biggest IKEA in the World in Sweden.

The biggest IKEA in the world is in Sweden. Naturally. It is where the company started. At 594,000 square feet, the store south of Stockholm is massive.

The Free Press reported that IKEA has submitted a revised building footprint for their Kenaston and Sterling Lyon location.

Once planned as a massive 350,000 square foot monstrosity, it will now be larger by 12% and come in at 395,000 square feet. According to IKEA, the expansion will accommodate further warehouse space. This will make it the second largest in Canada as it will be overshadowed by the re-building of Ottawa's store to 430,000 square feet.

The endless construction by Fairweather Properties prepping the roads around the area is enough to make your teeth grate. Many times it is simply dangerous in there moving around. At $26.5 million and with three traffic lights, the cash for IKEA is being fronted by the company but they will be eventually get back all of it minus $4.5 million.

Hopefully, someone inspects the roads after to avoid the Cinema City zoning fiasco.

There are a lot more development announcements happening on Kenaston. Traffic outcry is only going to increase.

Still, I regards the IKEA expansion as good. I don't blame them for the traffic woes. Quite honestly, there isn't a place in the province where someone would not have a traffic concern. Had they gone downtown there would have been complains, Headingley complaints, Regent complaints.

Hope that someone is not asleep at the wheel when it comes to explosion of growth coming on Kenaston. Welcome IKEA but will the city let you down about your decision by bottle-necking the area 24 hours a day?
Posted by John Dobbin at 11:38 PM