By the way, would you stand at that bus stop in front of the theatre? You'd likely get picked off by a wide vehicle or fall into the ditch behind. 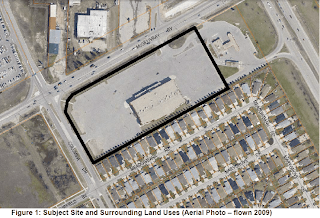 Meadowbank Road. Take a look at the theatre wall behind and the "landscaping" of evergreens between the theatre and back yards of the housing.

Back on June 9, the Assiniboia Community Committee approved a plan for Cinema City McGillivary to reduce the landscape buffer between the theatre from 20 feet to 16 feet. The lowest picture shows the mature evergreens which are the only buffer to the back wall of the theatre complex.

The zoning department enforcement people dropped the ball in 1989 when the theatre was built and instead of a 20 foot buffer there was only a 16 foot buffer. How this can happen is anyone's guess and City Clerk's office merely shrugs their shoulders and says it happened for "reasons unknown."

So why is it important now? Well, the Cinema City McGillivary owners wish to build a large Shopper's Drug Mart west of the theatre and any further development would require the 20 foot buffer required under zoning.

On June 9, the city committee approved a proposal to amend the variance to affirm the actual 16 foot buffer existing on the south side and to also make the setback from that buffer 10 feet instead of 50 feet on the west side. As a sop to the changes which would have cost the developer even more to comply with, a proposal of further landscaping in the parking lot out front was promised.

In case anyone is wondering just how busy that area is, right across from the theatre is Costco.

There is so much clean up left after all the zoning and building changes in 1989 that it defies description. In the last city election many people sang the praises of the work of the late councillor Bill Clement. His service is undeniable but it is also the work of his committee that did not put in service roads or drop the hammer on developers who violated their approved zoning.

There is a mess on Route 90 and a lot of it is in this area. Let's hope that the new councllor and committee won't say for "reasons unknown" that zoning here was laughed at by developers later on.

I recall Glen Murray saying once before that the rapid development at Kenaston and McGillivray caught the City off guard and that adequate provisions weren't made to handle all of the stores and traffic. To the extent that the City dropped the ball there, he was right. That corner went from bald prairie to bustling commercial hub in a little over five years, but the layouts and infrastructure can barely handle the peak loads in the area.

The area continues to build and if the zoning department continues to shrug about significant violations in variances, we are going to see more of this.

Now, I have nothing against Shopper's moving into the area but it is a gong show in the region and it grows with every house in Waverley West, every new development along Kenaston.

Overpasses and access roads is what this area needs. Someone needs to go down to City hall with a Clue-by-4 and whack some sense into our city administration.