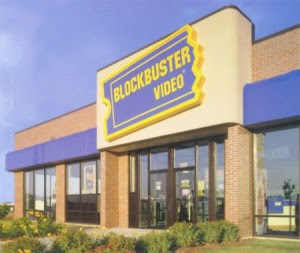 We recently saw Blockbuster Video in the Osborne Village close down. It has been something happening across North America although at a slower pace in Canada than the U.S.

Now, we hear that Blockbuster in Canada is being forced into bankruptcy due to missed payments from the parent company. The Canadian operations were used to help finance the U.S. ones. We have seen this type of issue before where Canada's operations were doing better and then the U.S. went under and took the Canadian part of the company down too. Linens and Things Canada was profitable but the U.S. closed the while company including in Canada rather than spin off the division.

I have mentioned the problems for Blockbuster here before. However, their situation in Canada has not been as dire. This is in part due to our slower Internet and that companies such as Rogers and Shaw who are determined to make companies like Netflix super expensive by extra billing if you download high def Titanic from them.

Shaw, Rogers and the other Internet providers are acting in their self interest by pricing their video on demand services at the forefront and pricing everyone else's out of reach.

The advent of video kiosks also has had an impact on Blockbuster. Safeway stores in Winnipeg have them. However, I have found they don't carry a large selection and not as convenient to return since you actually have to enter the store to put the video back in the kiosk. Perhaps if there were a lot more and a large selection, this would be a good option. As it is, it isn't as an attractive option for people who shop once a week at the store.

In recent months, the greed of the Internet providers and the inconvenience and lack of selection of the kiosks has made me appreciate Blockbuster a lot more.

It remains to be seen what the chosen delivery system for entertainment will be. The Internet providers want it to be video on demand but their ever greater gouging turns people off and makes stores like Blockbuster a good option.

It is funny how I think my options for watching a movie at home have become more limited rather the other way around.