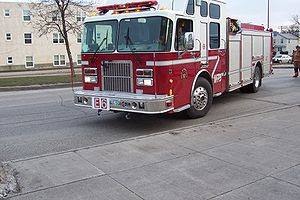 Winnipeg firefighters are advocating for 24 hours rather than the 10-14 shift pattern they have now. Western Canada stands apart from the east where many of the large cities have turned to 24 hours shifts. Ottawa is the latest city to switch to the schedule on January 1st.

Firefighter unions have liked the idea for some time as some members live far outside of the area and commute. In Vancouver, for instance, some firefighters commute up to 2 hours each way.

Several years ago there was a report on where police, fire and paramedics lived and the answer was that many lived outside the city of Winnipeg, sometimes quite far.

The chief of the Toronto Airport Fire Department Mike Figliola has said that moving to a 24 hour shift makes firefighting a "well paid part-time job." His comment is probably referring to the fact that with a 24 hour shift, firefighters will work 7 days days of 28 each month.

It has long been known that even with the present schedule that, Winnipeg firefighters are hard workers and sometimes have other jobs. Some big residential developments in Winnipeg have a firefighter behind them.

On December 9, 2010, the Globe and Mail had an article about how full-time firefighters were behind a large business called Fireman Movers.

Firefighting is a hard, life shortening job. However, the taxpayer might have some serious considerations if the schedule set up lends itself to firefighting appearing to be part-time work.

The evidence that the 24 schedule is better is pretty thin. Moreover, since with Winnipeg has a combined Fire and Paramedic service, will it be a wholly complete different animal compared to its eastern counterparts? In other words, will our 24 schedule be far too much work for anyone to stand? If 60% of the calls are paramedic first response as they are in Vancouver, will it be too much to expect that after 21 hours that people will be as sharp as they were in the first hours? Big differences between the eastern and western fire departments on this issue alone.

If there will be support for the 24 shifts, the fire department union head Alex Forrest has to stop making outrageous comments that firefighters don't sleep on their shift. Really? You want to stick to that comment? On a 14 hour shift overnight and no major calls, the firefighters are not asleep? And in 24 hours, he expects no sleep as well? Maybe to verify that no sleep happens, the beds should be removed from the fire houses.

The empirical evidence is that where 24 hour shifts have been introduced in the east there has been a corresponding increase in retirements, sick time and overtime.

The 24 hour shift should not be adopted if the result is extra costs to the city and a mass of retirements of older staff who can't stand the longer shifts.

The taxpayers of Winnipeg will be expecting some honesty about what the merits of the program. It won't help if the union chief talks about how firefighters won't sleep at all during the 24 hours. It won't help if city officials talk about doing what is best for firefighters if the cost and productivity is compromised. Actual realistic assessment is needed and serious thought done about why such a schedule is good for Winnipeg.

At one time there was a specification for bed quality in their union contract. I doubt it has been dropped.

More sleep on the job, and more time to make bonus on the side. Yeah right. Go Alex.

Odd that in recent years the healthcare industry has been trying to move AWAY from 18 - 36 hour shifts yet firefighters are looking to move toward it.

At the end of the day you cannot expect the 9 to 5 crowd to understand the challenges of our Profession. After the long stretch of 86 hours in a row a firefighter is physically and mentally fatigued. The only arguments you ever hear against the 24hr schedule seemed to be based more in jealousy than reality. Good luck to the brothers in the Peg!

'try really working like a cop...'
the last refuge of a person who didn't have what it took to pass the tests to become a firefighter...tsk tsk

Paramedics on the back of fire trucks cannot and should not be working 24 hour shifts. Completely crazy.

Winnipeg Fire should not get 24s. How does a paramedic respond and treat appropriately after 20+ hours of running medical calls, after all, fire depts. now require paramedic responses to justify their job.

First thing, 95% of medical calls are not life threatening nor time sensitive so the argument for sending a huge million dollar fire truck to medical calls is unjust. A single unit, highly qualified paramedic in an SUV is much more efficient and cost-effective. The only reason why firefighters and their unions are attempting hijack paramedic response is to save their jobs from cutbacks, layoffs, etc. Firefighters have had effective prevention programs including better building construction methods and fireproof materials, fire calls volumes are declining while medical calls continue to grow 3-7% annually. Unfortunately, fire unions are political lobbyists now and often see myths and non-truths of their capabilities, and if course, their love for the community and the endless fire hero worship continues.