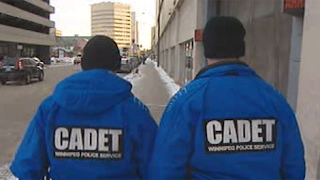 The police cadets are being noticed.

And they have already been credited with helping locate an armed robbery suspect.

So far there are 29 cadets out there and there are enough of them that they could make a difference in areas where police resources could be better used. The cadets are to be used to secure crime scenes, direct traffic and even guard mental health patients.

Unlike the Business Improvement Zone patrols, they can be moved around all over the city.

It will be important for the cadets to continue to work closely with the police training officers and for reports to be made to the city about their progress.

There are many jobs the police probably would probably rather not do. Traffic enforcement is probably a big one where a few cadets would be better service while a signal light in being repaired.

Imagine how useful cadets are in a search where a photo might be shown door to door.

It took a while for this to get going but the mayor, council and the Winnipeg Police deserve full credit for this.

Let's see if the presence of cadets makes people feel safer and produces numbers that verify this.

I guess the big question to be answered is whether we would be better off with the cadets or more police officers.

I imagine it would be the latter, but if you can have a bunch of cadets for a lower cost than the equivalent number of police officers (thereby freeing up officers in the process to do "real police work") the net result might be similar, but at a lower cost.

I'm certainly not opposed to cadets - their presence has been positive - but it seems to be more about trimming the budget than about improving public safety.

OMC: The amount of training and how much cadets cost probably means more of them on the streets, faster than how long to get officers and doing work the police don't generally want to do such as traffic and securing a crime scene.

This could be a good thing.