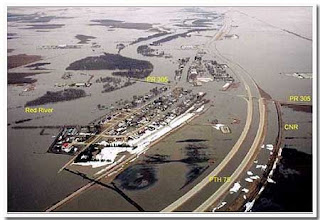 Even with the protection of the Red River Floodway, it looks to be a year where flooding will be an issue. Manitoba fell just a smidge under the record for wettest year ever. Heavy snow continues to fall throughout the Red River Valley.

Winter isn't over yet and very heavy snows late into winter early spring are not uncommon.

The big question will be how quick the spring melt will be and whether we have a wet spring of rain.

Winnipeg's timing in terms of completion of the Floodway is very fortunate. However, there is no doubt that south of the city there could be a lot of water. I suspect the main roads down to the U.S. could be shut down down for awhile. Some U.S. communities are still not well protected. Fargo, North Dakota could face trouble. Grand Fork, North Dakota is better prepared but for how much past 1997 levels is hard to say.

We have gone through all this before. We have prepared for levels of above 1997 and have used 1826 flood numbers as a basis for protection. No one really knows how bad the 1776 flood was but by some accounts it was even greater. Are we prepared for that?

There have been some very extreme weather patterns in the last years. We in Manitoba have prepared better than others for flooding but not all of it can be mitigated.

Grand Forks North Dakota will have it so bad they'll lose a fork and be renamed Grand Fork.

I'm going to clean all the snow away from where the dike went in '97. I believe we are going to have a terrible flood.