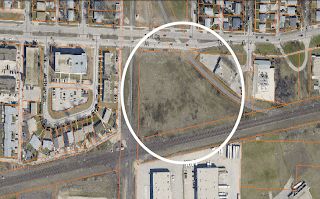 The piece of land on Taylor Avenue in question.

The City Centre Community Committee discusses this week the plan for a new spa on one of the last pieces of land along Taylor for development.

Nothing against the spa or developer that is making plans for the site. However, if the idea of ever putting a north-south corridor for active transportation along the Burlington Northern line is to be a success, it will have to have an exit in south River Heights.

The old CN Oakpoint line already has condos going up on it so that can't be used but there is enough land alongside BNSF's line to run from Wellington Crescent all the way to Taylor Avenue where it could connect with a bike path all the way to Fort Rouge.

The middle photo shows the land up for development.

The bottom map shows the area of south River Heights being developed.

There are so many times we hear about conflicts between drivers and bikes. Is it possible to ensure that there is a right of way path along the rail line for bikes or footpath in the future?

The development can proceed but think of the future for once, please.

While I agree with your request for some planning, I doubt anyone will have the foresight to think past next week. Missing the opportunity for a transit corridor along the Oak Point Line is enough to make me believe there is no one at the wheel. It's unforgivable.

We'll have to see what happens today with this development on Taylor.

I agree, John. It's somewhat staggering that the City didn't really take advantage of the opportunity to plan out the future use of this important strip of land. It was just dealt with on a totally ad hoc basis - very unfortunate.

I haven't heard how this decision went yet but some vision ahead might take into consideration what happens if Burlington Northern looks to locate outside the city.

Will the city try to put up another line of condos because they don't have any options anymore? Or will they be able to say that they planned for this event and now a trail for biking, walking is set to go ahead?