Martha Stewart Gets Too Close To Polar Bear 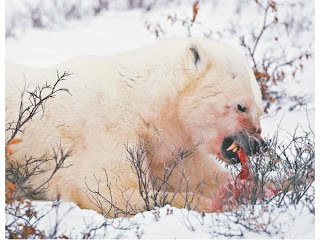 Martha Stewart being consumed by a polar bear in Churchill, Manitoba 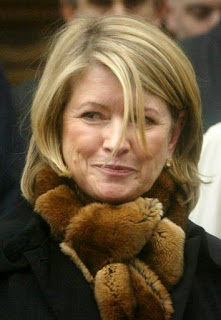 (CP) Canada went into full damage control after Martha Stewart was consumed by a polar bear in Churchill, a northern port city on Hudson Bay in the province of Manitoba.

Martha Stewart, a business woman and style maven from the United States was in Manitoba taking part in a whirl wind expedition to see polar bears and experience life in northern Canada.

Following a tundra buggy ride where Stewart and guests photographed polar bears well outside the reach of the animals, Stewart was given a gift of a seal skin jacket from Premier Greg Selinger in a small ceremony commemorating the visit. This proved to be a fateful decision.

In an error that is being investigated by the RCMP, Stewart was misdirected to the polar bear handling Quonset building in the belief that it was where apple fritters were sold. With her fur-trim hat and seal skin coat, she was indistinguishable from the main prey of the polar bear: the seal.

The four bears in the Quonset hut were upon Stewart in moments and despite a valiant effort in which she knocked out two of the bears, she was held down by one while the other pummeled her with his paws.

At a news conference held outside the town hall, Premier Greg Selinger extended apologies to the family of Stewart and said that game wardens were on the look-out for the four bears that had escaped out on to the ice.

Churchill Mayor Mike Spence said the only identifier on the bears was a stylish scarf around one of the bear's necks. He indicated that this was not likely to be worn by any other bears out in the bay.

I was in Churchill recently (Polar bear adventure in Churchill – with VIA Rail) and the whole town was buzzing about her visit. But Martha getting bested by a bear? Hardly! Expect white fur-themed Christmas crafts this year :)