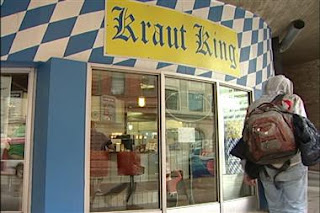 Today was the last day for the Kraut King restaurant to operate downtown on Garry Street. Both owners complained about drunks and violence driving their business away.

“Having the phone to my ear, calling 911 and a machine kicking in, and seeing four guys from the hotel down the street coming towards us and thinking I’m dead, we’re dead.”

Even the Global News reporters had to call the police about threats when they were doing their reports.

One of the owners reported being assaulted and robbed. The other owner thought her own life was at risk.

It wasn't too long that Wild Planet was driven out of the downtown. It isn't acceptable that businesses are being driven out by danger.

This isn't the perception of danger either but actual danger that is not just anecdotal but shown in statistics.

All candidates in the coming federal, provincial and civil elections will have to address in specifics what they think should be done. Sam Katz has been mayor for a while. The problem is worse now. He can't simply pass the buck when Winnipeg stands out as trending in the opposite direction on crime. Greg Selinger can't ignore the situation either. No elected MLA or councillor in the city can say that they are doing all they can when things are said to be worse, not better.

Results are going to be the proof that people look for and we are not seeing that when hardworking business people and their clients flee and area of the downtown.

Don't blame the province, we have given resources to the City of Winnipeg. Sam Katz is ignoring downtown for his friends in the south end of the city.

Liquor control does rely on the provincial enforcement. The province really does have to accept that they set the hours at liquor marts and are responsible for over-serving at bars and hotels.

It is not such an easy job of washing one's hands of the whole thing and blaming the mayor and council.

Blame goes a long way and with so many provincial MLAs in Winnipeg, there won't be much tolerance of passing the buck.

John , the Winnipeg Police turn a blind eye to loitering and people who drink in public. Sam Katz can clean up downtown if he chooses to. The hours at Liquor Marts are similar to other provinces. We enforce strict standards at liquor marts including not selling to intoxicated persons. We have also increased funding to addictions programs, which the opposition party voted against. We have done our part.

I don't know that the province brush off the fact that after ten years, Manitoba is seeing a spike in crime. Blaming the police and the municipal governments by saying that the province is doing its part is not reflected in the numbers.

Blame all three levels of government for this because if they can't come up with a solution to crime which is province-wide. It isn't just the downtown areas of the city.