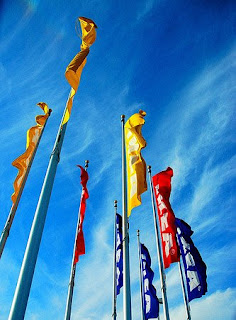 The road construction plans were revealed last week by the city of Winnipeg.

The road plan indicates that both Kenaston and Sterling Lyon Parkway will be expanded to nine lanes in each direction. The cost will be around $22 million and the $400 million project will take it around $6 million in taxes.

The full report is here including the lay-out of the retail outlets.

The Free Press reported that public hearing would reveal this:

Fairweather, the developer of the IKEA property has said that they will pay $26.5 million to expand roads at Kenaston, Sterling Lyon and Shaftesbury. In the end, after the city pay the developer back, they will only have paid $4.5 million. That's a lot of road but then we are talking about and a lot development.

It can't be seen in a vacuum. Waverley West and the Kapyong Barracks along with everything else that is connected to Kenaston has to be looked at in terms of traffic, livability and how it affects surrounding areas.

I personally think Ikea will be a good thing for the city. Much like how Old Navy and Sephora are desination stores, IKEA is the premiere destination retailer. People will come from all over the province, northwest Ontario all the way to Thunder Bay, and from eastern Saskatchewan. It is hard to say if it will attract people from North Dakota but it might for those who think two hours to come to IKEA is better than five or more to Minneapolis.

There will be Manitobans who have been making special trips to Edmonton and Minneapolis who will now stay in Winnipeg to shop.

All of this is good for jobs, taxes and to attract tourists.

On the negative side is the fact that Kenaston (Route 90) is ill equipped to handle the traffic that is booming up and down its length. In some ways it is becoming as important as Portage Avenue. It connects several important destinations in Winnipeg. The Richardson International Airport, Polo Park, Kenaston at McGillivray and Waverley West all depend on this road. It is far too narrow to handle traffic now.

The traffic signal timers that Sam Katz trumpeted more than a year ago for Kenaston don't work as we learned in December when traffic was backed up for as long as an hour or more heading out at the end of the day.

It is not enough to study just what is happened from Academy Road to McGillivray. The entire blueprint of Route 90 needs to be looked at how it will affect the task of simply going to the airport or home at the end of the day.

I support Ikea and at the onset don't have a major problem with the location. I prefer it to the possibility of an industrial park. The city does have to get its ducks in a row though.

Not everyone will be happy. Some along Kenaston will not be happy for sure but the writing has been on the wall for houses alongside the road for some time. The Not in My Backyard syndrome is strong all over the city. Some others are against the development in principle. They seem upset by the whole idea of malls and the like and advocate for the smaller local retailer as part of the community. I have sympathy for that thinking but it only goes so far. The nostalgia for tight knit communities runs smack dab into the reality of life now which is that we are mobile, work unusual hours, have a variety of interests and are looking for selection that reflects our personal tastes and style.

In other words, something like Ikea is the equivalent of the big box department stores of the past except that they are in suburbs rather than downtown.

Ikea is where the people much in the same way Eaton's was. Modern life.