Just a short time ago, the Winnipeg Free Press asked its readers to tell the paper which stores did they want to see come to Winnipeg next after Ikea announced its intentions. Sephora was one of the stores mentioned along with Target and Crate and Barrel.

I had never heard of Sephora and why not? Well, it is a cosmetics company based out of France. Little did I know that people from Winnipeg actually make trips to Toronto or Edmonton to shop at this exclusive store.

Now word comes out that Sephora is building a 6000 square foot retail space in Polo Park. It will be their 13th location in Canada and the first outside Quebec, Ontario and Alberta. The store is moving into the Tommy Hilfiger location in the mall.

Tommy Hilfiger already has a location at the Kenaston and McGillivray so the closing of the Polo Park location might be nothing more than consolidation to a site with a lower rent and better parking.

Sephora should be able to do well at Polo Park and will be one more reason for shoppers to stay in the province for their purchases.

myspace hit counter
Posted by John Dobbin at 9:54 AM No comments: 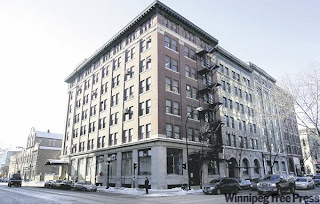 One development after another in the city has run into trouble. Even the no-brainers somehow become bogged down with competing interests to the point that work gets delayed or cancelled. Sometimes developers when they do get the go ahead do a sleight of hand and underdeliver on their promises such as what is happening with the Winnipeg Regional Health Authorities office on Main.

It all goes back to City Hall. Some say we should stick to Plan Winnipeg which I agree should be a major force in decisions in the city. However, we also need a better response to developments that require a more fleetfooted decision making process.

Seems to me that a open conference on even one of those areas would do the city some good. If one looks back to the success of The Forks, it came as a result of public hearings. If only North Portage had some of the same public involvement.

myspace hit counter
Posted by John Dobbin at 9:20 AM 1 comment:

Sign from Ottawa that goes up when they have planned snow removal.

The issue of a snow removal parking ban comes up every year and every year people grumble about having to take move their cars off the street to allow for snow removal.

This past winter tickets were issued when many drivers didn't move their cars. The mayor quashed all those tickets much to the dismay and anger of councilor Bill Clement.

Other cities have snow route bans in place such as Edmonton and Ottawa.

There are too many residents with garages who park their car on the streets even when they have a garage. There are many people who also say for socio-economic reasons that they cannot afford a place to park so they park on the street. That means that every snowfall, there are a lot of people with vehicles on the street.

It seems clear that the city needs to review its entire parking policy top to bottom so that many outstanding issues of handicapped parking, parking tickets, parking meters and parking restrictions become more transparent.

Some cities have had used alternative street parking during snow removal. How could this be done? Well, it would not be easy because the streets are not set up in every neighborhood as a grid system. However, if some accepted alternative parking plan was set up, it could address the issue of those who say that they need a place during snow removal.

myspace hit counter
Posted by John Dobbin at 11:10 AM No comments:

Although it has been closed since October 31, 2008, it looks like the deal to buy the hotel has been completed. The 44 year hotel built in 1964 has been bought by Co-Op Gas as reported in the Metro.

The owners of the Park West Inn near the perimeter say they have noticed an increase in traffic.

That hotel is too far away to really count as a neighborhood watering hole.

It seems the local non-alcohol gathering spot is now the new Starbucks located in the former Robin's. On any given night, Ashahi restaurant, Subway and Starbucks have a full parking lot.

Once again the Black Rod blunders in with his usual aplomb.

He gets the Superbug wrong by calling it HRSA. Sorry, it is MRSA.

As for his concern about how the infection is contained, he doesn't bother to research it. Isolation is usually handled with a curtained off bed. There are only so many isolation rooms.

The Black Rod is usually up on his high horse on healthcare and more often than not gets it wrong. 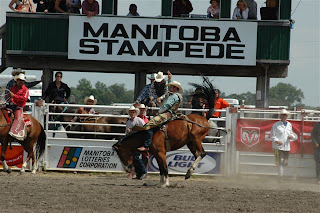 A mentioned in Part 1, the section of Highway 75 running through Morris has to about the worst part in terms of crumbling and heaving concrete.

It looks like a bypass around the town is not in the cards. However, it looks like re-building the road is being pushed back as well. In a Free Press story, word is out that there will be a one year delay to rebuild the 2 kiliometre stretch through town. The cost of the construction is about $9 million.

One wonders if Morris' $9 million is about to be spent in Winnipeg on a new stadium or road expansion for IKEA.

This is a busy stretch of road. $15 billion worth of trade passes through town. It would help if the province kept that in mind when budgeting this year. 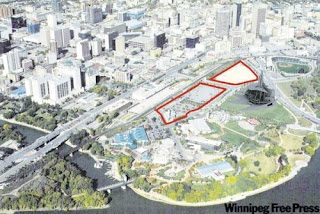 The sections of the Forks considered for development Source: Winnipeg Free Press

The Forks North Portage Partnership has announced what their thoughts are on the remaining section of land south of Canwest Park. At the moment the land is a 6 acre parking lot.

There will be a public consultation but the The Forks CEO is angling for mixed use which includes housing. This has been rejected several times before in part because people seem to sense that as soon as people live at The Forks that they will have a "not in my backyard" attitude to things like fireworks.

There are a few smart things that The Forks people are considering:

A central piece of the development will be a European-style promenade, a one-kilometre public walkway featuring fountains and sitting areas that will stretch from Pioneer Avenue to The Forks Market.

The impetus for looking at the site alongside the rail line is the development of the Human Rights Museum. In the long term, it will mean the end of over 400 parking spots for The Forks.

Like or not, the main way for Winnipeggers to get to The Forks is by driving. The Human Rights Museum as well as The Forks needs parking.

The last major development at The Forks occurred in 1999 with the building of the Inn at the Forks. I was dubious about it because the pictures of the hotel looked awful. I was also concerned that the hotel blocked direct access to the concert bowl and that hotel patrons would complain about concerts and fireworks.

I was relieved about how attractive the hotel turned out to be. My fears about complaints about noise from hotel patrons was unfounded. I still have questions about the flow of pedestrian traffic but they're minor.

The construction of the skateboard park in 2007 was brilliant. It immediately became an attraction in both summer and winter. I don't know if it would have been possible if people lived nearby. The fear might have been about kids congregating in the area.

There have been so many missed when it comes to apartment building in the city. I will look at The Forks proposal on mixed use but it seems to me that the focus for housing should be just off the site rather than on it.