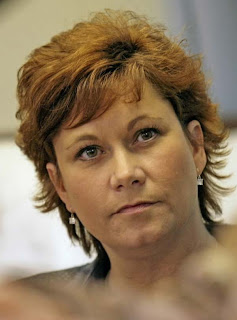 Thereasa Oswald at the announcement of the new hospital.

In the election in 2007, the NDP promised to build a new Women's Hospital for around $40 million. The old one, as mentioned here was built in 1950. It was meant to handle 2000 deliveries a year but that number has jumped to 5000 a year.

The NDP government announced on September 10 that they would build a new Women's Hospital on the site of the Weston Bakery across the street from the Children's Hospital.

For the NDP it was a bit of a coup to both negotiate for Weston Bakeries to move from their present location to the Fort Garry courthouse on Chevrier. That property had turned into an albatross for the government when it was never used for the high security trial it was built for. The bakery had been making noises about moving to Saskatchewan.

According to the Free Press, the original Women's Hospital was located a half kilometer away from the Children's Hospital because of an outbreak of childbed fever in 1936. While it might have been a good thing at the time, it is not only inconvenient but dangerous to have the hospital so far away. The crash cart team had to make a mad dash through the tunnels whenever a child's life was in danger.

The new hospital won't be built until 2009 as the Weston Bakery needs the time to complete their own $25 million building on the Chevrier site.

Let's hope that the new hospital will not be as ugly as most of the rest of the hospital buildings are at HSC.