Home Outfitters/HBC Home to Close - Sak's Off 5th Might Close 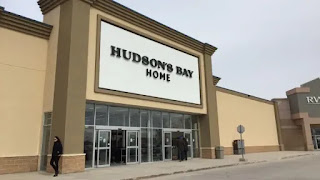 It is interesting to note that the St. James location once housed Linens and Things which failed years ago taking Canada's 55 stores along with it. Sadly, it and the other two location HBC locations will be liquidated along with Home Outfitters.

Winnipeg's two major malls at Polo Park and St. Vital are still looking for the perfect fit for their former Sears stores. And more store space is being built even as companies like HBC and Sears close stores. Other retailers as well are closing across Canada including Winnipeg. More on that in another post.

It would be easy to blame Amazon as online retailing has indeed created problems. However, the simple fact is that too many stores can also hurt your business model. Companies like Disney, Lego and IKEA have fewer stores and offer experiences that stand out. They become destinations in and of themselves.

The more interesting announcement by HBC was not that Home Outfitters was closing but that they were closing 20 Sak's Off 5th stores in the U.S. and re-evaluating the whole company. HBC has so far affirmed confidence in Winnipeg's store at Outlet Collection of Winnipeg. It is unknown how profitable the store is in Seasons of Tuxedo.

The Seasons of Tuxedo is continuing to fill in with stores, entertainment and services. But it is also filling in with residents. Thousands of people now live on site. It will be interesting to see if this helps business in the area as they have a resident population within steps of the mall.

In 2019 though it would appear landlords are going to have to struggle to fill space. It could be we see some rent decreases and sub-dividing space to make it more palatable. We also might see some local concepts take off in this new landscape.
Posted by John Dobbin at 9:46 AM