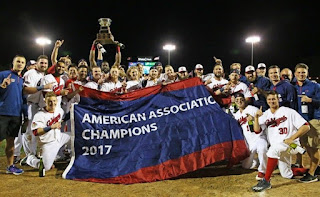 All season long the Winnipeg Goldeyes have been playing well, putting up wins, being entertaining as can be and affirming they are the best of the best in American Association ball. Frequently this year they have had "wow" moments in Shaw Park and throughout the league. Ultimately, the great play led to another play-off run where the defending 2016 Goldeyes champions would once again play their rivals the Wichita Wingnuts.

Goldeyes have become comeback specialists in play-off baseball. Game 4 in the series was a marathon 17 innings assisted by luck from an umpire's call and amazing pitching. Game 5 was delayed a day for weather and probably to rest two extremely weary teams. The result was of the one day wait was a 6,300 crowd with standing room only. This was a huge improvement over the lesser crowd on Monday's game 4.

In the game 5 final, the Goldeyes bats came alive and the big hitters sent the score into the stratosphere. Crowd favourite Reggie Abercrombie played a very big game. Edwin Karl as pitcher kept Wichita off the scoreboards. Ultimately the score would end 18-2 and the Goldeyes would be able to rush into the field in front of a hometown crowd claiming victory. It was a first in 18 years at their downtown location.

Back to wins are never easy and Winnipeg Goldeyes found new ways to stay alive several times over the course of the season. It takes a lot to have a winning formula, It is built with coaching and management, great players, fans, supporters and community and business support. Congratulations to the champions of the the 2017 American Association of baseball!
Posted by John Dobbin at 9:46 AM